Dramatic images of seabirds, entangled in netting or with their stomach cut open to reveal ingested plastic, generate stark headlines from news outlets and on social media, and tug at our heartstrings. Yet, with 4.8–12.7 million metric tonnes of plastic estimated to enter our oceans every year (Jambeck et al. 2015) it is hardly surprising that seabirds have to contend with the potential problems. Marine debris, much of it plastic, has affected 56% of all seabird species through entanglement – either at sea or at the nest – or ingestion (Gall & Thompson 2015). Lost or discarded fishing gear, along with other filamentous plastics, can entangle seabirds at sea or, where collected for nesting material, on the breeding grounds. These and other post-consumer items, everything from a lost flip-flop to a carelessly discarded plastic bottle, break down into smaller fragments that along with nurdles, the raw plastic material transported for manufacturing, can be ingested by seabirds, either incidentally or because they resemble food. In addition, microplastics have been documented in many species of fish, crustaceans and bivalves, which may be eaten by seabirds (as well as other top predators, including humans) resulting in secondary ingestion of plastic, and the potential accumulation of any contaminants associated with marine plastic. 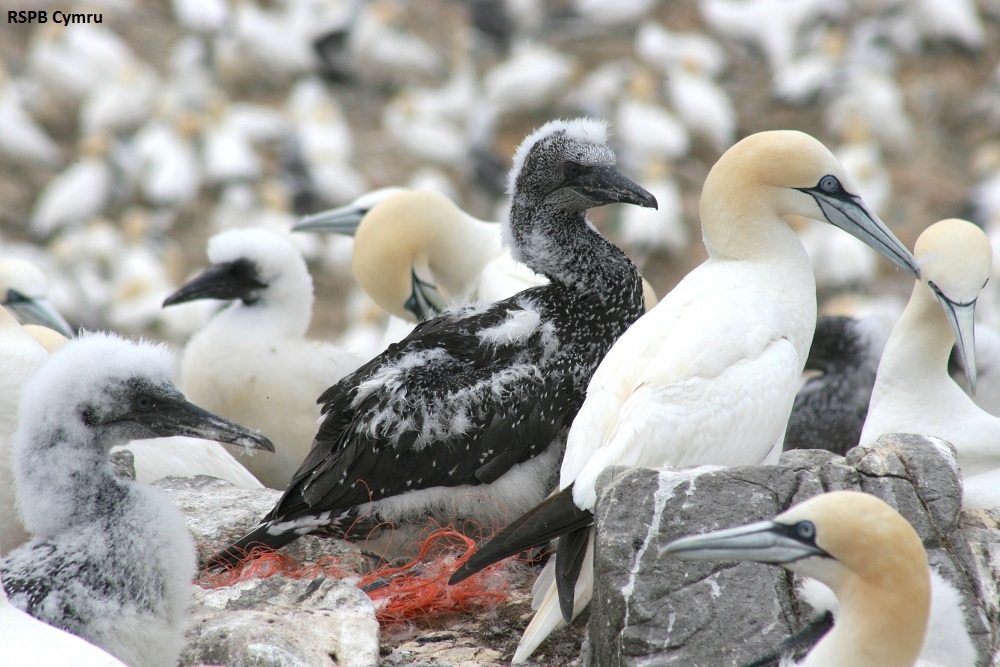 Juvenile Northern Gannet Morus bassanus entangled in threads of plastic fishing net on its nest on Grassholm, Wales. This individual was lucky and was cut free on the RSPB’s visit to the island. RSPB Cymru

Despite these figures and the media headlines, we still do not have a particularly good understanding of how plastic affects individuals or, more importantly, populations of seabirds. For most species in the northeast Atlantic, the lack of research means that we do not know to what extent individuals are ingesting plastic or incorporating it into their nest. Even for those species on which research has been carried out, sample sizes are generally small and most studies have collected data from single locations and years, making it difficult to establish patterns over time and space, or among species (O’Hanlon et al. 2017).

One exception is the Fulmar Fulmarus glacialis. Fulmars are particularly susceptible to ingesting marine plastic, which they pick up from the sea surface along with their usual prey items of squid, fish and carrion. Tideline corpses of Fulmars have been collected along North Sea coasts to monitor levels of ingested plastic since the 1970s – emphasising that this is not just a recent issue. Originating in the Netherlands, the North Sea Northern Fulmar project has since been joined by other countries, with beached birds collected from Shetland, Orkney, eastern England and the English Channel, as well as farther afield from Svalbard, the Faroes and Iceland. This successful collaboration has resulted in the Fulmar being the OSPAR Ecological Quality Objective indicator species for monitoring plastic debris in the North Sea (van Franeker et al. 2011) [The Convention for the Protection of the Marine Environment of the North-east Atlantic (the ‘OSPAR Convention’) was developed from the 1972 Oslo Convention on dumping waste at sea and the 1974 Paris Convention on land-based sources of marine pollution. See www.ospar.org]. In the latest OSPAR report, covering 2010–14, 93% of 525 Fulmars collected contained plastic in their stomach; 58% of these stomachs contained more than 0.1 g of plastic, with the highest amounts found in Fulmars collected around the English Channel. The long-term goal under OSPAR is to reduce the number of Fulmars with more than 0.1 g of plastic in their stomach to less than 10%. We still have a long way to go.

Our understanding of how plastic is incorporated into the nests of seabirds is even more limited. There are plenty of photographs and anecdotal records but very few published, quantitative studies. The extent of plastic incorporated into the nests of Northern Gannets Morus bassanus on Grassholm, Pembrokeshire, is huge; there is an estimated 18.46 tonnes of plastic within the colony, incorporated into over 80% of nests. Most of that plastic is the threads of fishing nets, picked up by the adults presumably because of its resemblance to seaweed and other vegetation they use for nest construction. Each year the RSPB visits the island in autumn to cut free Gannets entangled in their nests. Sadly, around 65 entangled individuals still die each year across the colony, the majority of these being young birds that fail to fledge. With over 78,500 breeding individuals on Grassholm, it is unlikely that this level of mortality is a significant brake on this expanding population (Votier et al. 2011), but it clearly has welfare implications. And Grassholm is not unique. Similar scenes of blue, green and orange fishing rope entwined into Gannet nests can be seen at Bempton Cliffs in Yorkshire, at Helgoland in Germany, at colonies in Scotland, Norway and Iceland, and many others. It is not just Gannets that are affected, and other seabirds, such as Common Guillemots Uria aalge, which often nest in close proximity to Gannets, can become entangled in the lengths of plastic that hang down.

Establishing the overall impact of marine plastic on seabirds is difficult. We can see the direct impact of plastic on individuals where entanglement results in injury or death. It is much less straightforward with ingestion because it is difficult to establish ingested plastic as the cause of death unless it has blocked the digestive track or caused obvious lesions. For most of the seabirds inhabiting any given colony it is impossible to know the extent to which individuals have ingested plastic. Then there is the uncertainty of how contaminants present within the plastic, or adsorbed to it, may negatively affect seabirds at the cellular or sub-organism level. Measuring indirect, sub-lethal effects is even more challenging. Yet we need to understand all these potential effects to make an accurate assessment of the impact of plastic on seabirds at the population level. At present, there is no evidence that plastic is having a negative effect on seabird populations, or is involved in the dramatic declines of many seabirds – but given that research into the impact of marine plastics on seabirds is so limited, it is difficult to draw informed conclusions.

Unless we do something about it, the amount of plastic entering our oceans is projected to rise by an order of magnitude by 2025 (Jambeck et al. 2015). By 2050, given the seemingly global demand for plastic products, it is predicted that 99% of seabird species, and 95% of individuals, will have ingested plastic (Wilcox et al. 2015). If nothing else, these gloomy statistics should encourage us to be cautious about underestimating the impact of marine plastic on seabirds, and other marine life: lack of evidence does not equate to lack of impact, even at the population level. Seabirds are long-lived and slow-reproducing so populations are particularly sensitive to declines in adult survival. Where plastic ingestion or entanglement results in adult mortality, this may contribute differentially to the declines of species that are already vulnerable to other threats, or reduce the recovery rate of species where conservation actions are put in place. Some people are concerned that the current focus on plastic pollution may divert attention away from better-known factors behind declining seabird populations, such as climate change, bycatch and invasive species. Surely it is more likely that the current focus on plastic pollution can help to draw attention to these other threats as well?

I have focused on seabirds in this article since much of the recent attention regarding plastic pollution has focused on the marine environment. However, this is not just a marine issue. There are many examples in freshwater and terrestrial environments of ingestion and entanglement of birds with plastic. The increase of terrestrial plastic debris, particularly in farmland habitats, has resulted in several raptors (including Black Kite Milvus migrans, Long-legged Buzzard Buteo rufinus and Osprey Pandion haliaetus) and passerines (including American Crow Corvus brachyrhynchos, bowerbirds (Ptilonorhynchidae), Great Grey Lanius excubitor and Loggerhead Shrikes L. ludovicianus) incorporating plastic into their nests, resulting in some cases to the injury and death of nestlings.

Compared with many other environmental threats, plastic pollution is one where we as individuals we can actually make a difference. As consumers, we can actively reduce our use of plastic, especially single-use items, and put pressure on organisations to do the same. It is encouraging to see the recent voluntary actions by several restaurant chains to phase out the use of plastic straws, and of many conservation/environmental organisations, including BB, that have switched to non-plastic alternatives for sending out publications. We can also take part in beach clean ups and lobby for better policies regarding plastic recycling/disposal. And this is the time to do it! Companies and governments are listening and many of them realise that they need to act. England and Scotland have vowed to ban single-use plastic, as well as to introduce polices such as the plastic bottle deposit scheme. But it is up to us as individuals, as well as communities and nations, to actively reduce our use of plastic, and make a difference. By making better and more informed choices in our consumerism and acting together we can elevate this issue and campaign for reform.

Nina O’Hanlon is a Seabird Ecologist at ERI, part of the University of the Highlands and Islands, working on two projects looking at the effects of marine pollution (plastic and oil) on seabirds. She is also a BB Director.