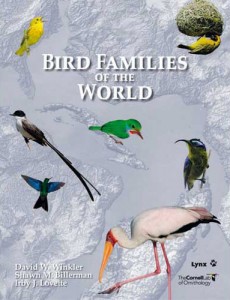 Lynx Edicions and the Cornell Laboratory of Ornithology, 2015; hbk, 600pp; many photographs, distribution maps and illustrations – all in colour

When I first heard about this book, I assumed that it would be a cut-down version of the family texts from the 17 volumes of Handbook of the Birds of the World (HBW). But I was completely wrong: this is a completely new book, created by a team at the Cornell Laboratory of Ornithology and using an entirely new set of (750) colour photographs. The only parallel with HBW is that it includes 2,336 colour illustrations from that publication to illustrate all of the genera. So it is a brand new book – and to ignore it as just a spin-off from HBW would be a mistake.

A 19-page introductory chapter explains how the book works and also introduces the reader to the complexities of taxonomic study. A short paper then introduces three completely new passerine families – Chaetopidae (Drakensberg Rockjumper and Cape Rockjumper), Hylocitreidae (Olive-flanked Whistler) and Modulatricidae (Spot-throat, Dapple-chest and Grey-chested Kakamega). None of these are new species – but all have been mixed up in other groups in the past and these new families are described for the first time.

Each of the family chapters gives a general overview of plumage and appearance, habitat preferences, food, breeding and conservation. There is also a section describing the relationships between each family and those that are currently considered to be their closest relatives. The one thing you can be sure of with taxonomy is there is no such thing as ‘the last word’; and the writers are very clear in pointing to where new research is needed. A colour distribution map for each family is included. The HBW illustrations of each genus accompany the chapters and the text is liberally scattered with colour photographs. These are generally of a high standard, although a few fall below that standard – such as the one of a Hypocolius Hypocolius ampelinus behind a mass of twigs.

Because of the strong cooperation between the teams at Cornell and Lynx, this new book actually confirms the direction in which Volume 2 of the HBW Checklist will be heading, in terms of macrosystematics. That book will appear towards the end of this year and so we can now see that, in total, HBW will recognise 36 orders and a total of 243 bird families. The current book makes radical alterations to the layout of the passerines. Many of these changes will be familiar to some, since they have already appeared in other published and online checklists – but with HBW currently recognising only 204 families, it is a major step forward.

There are too many changes to describe here in detail but, for example, in HBW the Old World warblers (Sylviidae) used to number 272 species in 42 genera, but now they are 65 species in 19 genera. Within these we used to have around 70 warblers of the genus Phylloscopus but now we have new families such as the Leaf Warblers (Phylloscopidae), which contains the genus Phylloscopus (now reduced to 15 species) and three other genera. So the Wood Warbler is now Rhadina sibilatrix and Pallas’s Leaf Warbler is Abrornis proregulus. The Acrocephalus warblers are now in a group called Reed Warblers and allies (Acrocephalidae), which consists of 53 species in six genera.

Another change is the split of Bearded Reedling Panurus biarmicus into its own family (Panuridae) and away from the parrotbills (Paradoxornithidae). Yet those people who rejoiced at the creation of many new species in Volume 1 of the HBW Checklist may be in for a disappointment with Volume 2; if the information provided here is correct, there will be 6,037 passerines – making a grand total of just 10,409 species.

Bird Families of the World is a significant book, and one that you will need by your side when working out how all of the new families fit together. Users of HBW (and most major checklists other than Howard and Moore) will find lots to surprise them in this book. Its style is less conversational than HBW, but it provides a lot of information in one place and deserves to be on the bookshelf of every world birder.