Abstract Official hunting statistics from 24 EU member states as well as Switzerland and Norway were collated. Data on 82 permissible quarry species of bird (listed in Annex II of the EU Birds Directive), mostly from the hunting season 2014/15 but in some cases from earlier years, were evaluated and compared with a previous study. The results show a total annual hunting bag of at least 52 million birds. In addition, a significant number of birds are killed, legally or illegally, in areas just beyond the study area and in European countries for which no data were available (Greece, Ireland, the Netherlands and the UK). Despite a long-term decrease in the gross number of killings compared with older data, the bag figures for certain species, such as Common Pochard Aythya ferina, Northern Lapwing Vanellus vanellus, Turtle Dove Streptopelia turtur and Skylark Alauda arvensis, remain high in proportion to their declining populations in Europe. Against a backdrop of declining populations of many affected species, hunting pressures may be undermining conservation efforts undertaken for these species in other countries. 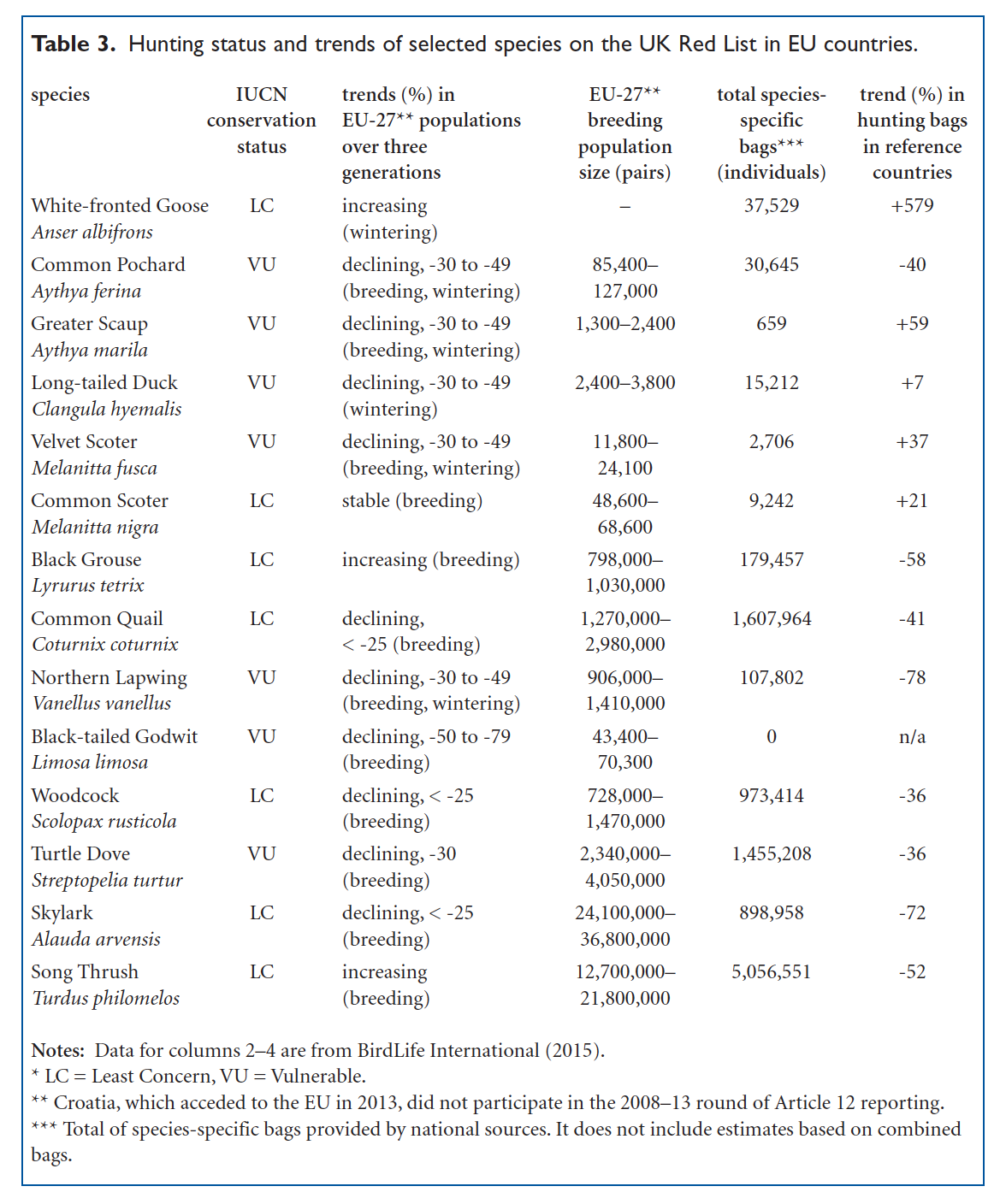 Against the backdrop of continuing urbanisation and agricultural intensification, there are grounds for concern that hunting may be an unnecessary pressure and potentially a contributing factor to the population declines observed in several huntable species, notably Common Pochard, Common Quail, Northern Lapwing, Turtle Dove and Skylark.

In our opinion, current levels of hunting of these species are no longer ethically and politically justifiable, especially given that it is effectively a minority hobby and generally not about the regulation of common species for public interest (such as protection of crops, livestock, human health or for aviation safety reasons). While hunting is not the main cause of their decline in European countries, it seems incomprehensible to consider further killing to be acceptable for reasons such as ‘harvesting a surplus’ or tradition.

Turtle Dove numbers have declined rapidly across much of the species’ range, resulting in it being listed as globally threatened. Declines are thought to be driven by a number of factors, including loss of foraging and nesting sites, disease and hunting along its migration routes. The fact we can conservatively estimate that approximately 1.5 million birds (one-fifth of the EU-27 breeding population) are shot legally each year is evidently not helping the sustainability of the species. The same can be said for several other vulnerable species listed in table 3. We suggest that Annex II of the Birds Directive should be reviewed, taking into account the latest information available on population trends and hunting pressure. Since the inception of the Birds Directive in 1979, no single species has been removed from Annex II Part A, which outlines the 82 huntable species within member states.

Article 7, section 1 of the Birds Directive states: ‘Member States shall ensure that the hunting of these [Annex II] species does not jeopardise conservation efforts in their distribution area.’ If European countries continue to authorise the hunting of vulnerable species, there is a risk that conservation efforts for these species will be compromised and they may continue to decline. This would be contrary to the aims and objectives of the Birds Directive and requires urgent consideration by individual member states and the EU Commission. In our view, wildlife conservation organisations should be more pro-active on the hunting issue, and campaign rigorously for hunting bans on vulnerable species in the individual countries.

You can also buy a single digital issue here 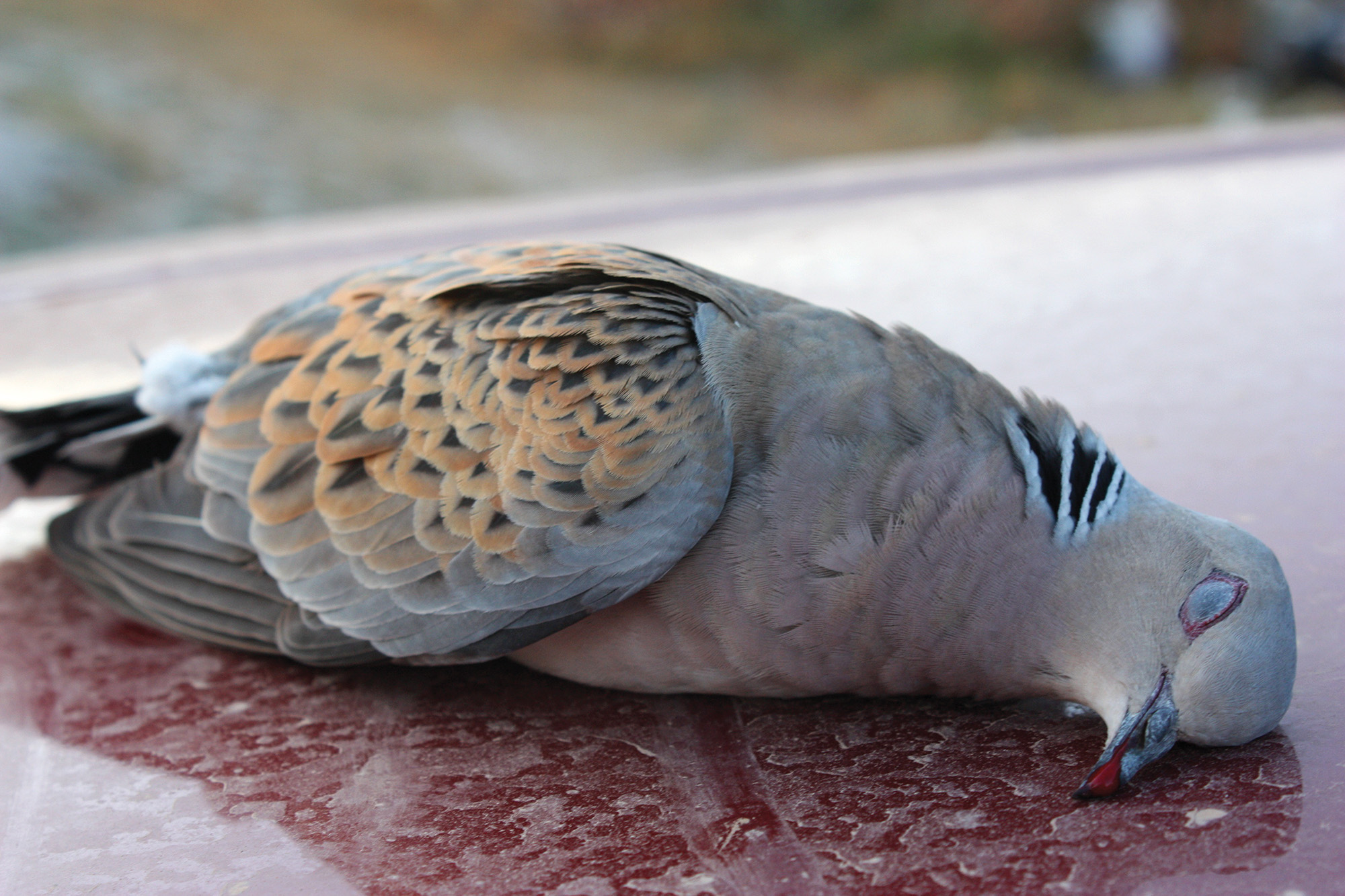 A Turtle Dove shot in Malta, and picked up by a CABS team member in April 2012. The data collated by this study suggests that around one-fifth of the European breeding population (or 1.5 million birds) of this globally Vulnerable species is shot legally every year. CABS