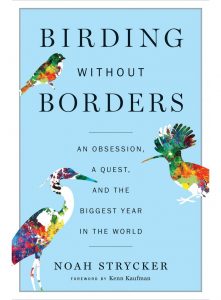 World year-listing is not entirely new as a challenge, although it has become more competitive in recent years. In 1968, Peter Alden became the first person to see over 2,000 species in a year. That was back in the days of relatively expensive air travel and at a time when information on world birding opportunities was sparse. Move forward two decades and in 1989 James Clements amassed 3,662 species. Then, in 2008, Alan Davies and Ruth Miller set another new record and became the first to break the 4,000-species barrier. In fact, they saw 4,341 species – an amazing feat. But no matter how keen you are, there is nearly always someone who is keener still, and in 2015 Noah Strycker set himself another goal: to become the first person to see half the world’s birds in one year. His haul of 6,042 species and how he managed to achieve it is the subject of this book.

Noah started his year at the bottom of the globe, in Antarctica, and over the next 12 months he birded almost every day, carrying just hand luggage and a series of one-way airline tickets. His journey took him across all seven continents and 41 countries – although not the UK!

Helpfully, the book includes a map to show his route and it makes fascinating reading. Having seen 53 species on his cruise north to Argentina, he then travelled across 11 countries in South and central America until early May. This strategy allowed him to add almost 2,500 species to his total. To give you an idea of his work rate, Noah was adding around 20–30 new species per day and seeing amazing totals in each country – including 784 in Peru, 749 in Colombia and 684 in Brazil.

Next came the USA, his home country, where he simply visited Texas, Arizona, California, Oregon and New York. In just 21 days he added 215 new species before heading to Europe, where in just 16 days he added 314 species from Iceland, Norway, Turkey, Spain and Germany. He added just one species in Germany: Egyptian Goose Alopochen aegyptiaca! Three months in Africa followed, and on leaving Uganda for the Middle East and Asia in early September, Noah had added over 1,100 species and his total stood at 4,204. In India (on the first of two visits), he added 409 species before continuing across Myanmar, China, Taiwan, the Philippines, Thailand and Malaysia. The final part of his journey, from late November, took him to Indonesia, Papua New Guinea, Australia, New Zealand, Singapore and finally back into India. Even on New Year’s Eve he added 11 new species.

As a keen world birder myself, I was fascinated by the route. Naturally, I would probably have included the UK in my itinerary, but Noah saw almost every bird on the British List somewhere else – although he was unable to catch up with Grey Partridge Perdix perdix, Eurasian Bittern Botaurus stellaris, Jack Snipe Lymnocryptes minimus and Mandarin Duck Aix galericulata. Among the places he did not visit I would have added Ethiopia – but I cannot fault his planning.

I really enjoyed reading this book, and found Noah’s style to be engaging and fun. I think he’d make a great birding companion. Not wanting to spoil the story, I won’t reveal some of the things that he encountered. Above all, I found myself impressed by his determination to keep going – and that he carried all his kit in a very well-packed rucksack.

As a postscript, as Noah ended his year on 6,042 species, Dutch birder Arjan Dwarshuis was just setting out, aiming to achieve 7,000 species in a year. He managed to find 6,833 and set yet another new record. Arjan followed IOC taxonomy, which provides a larger number of species than Clements. Had Noah also followed IOC taxonomy, this would have added an extra 111 species, bringing his year to 6,153 species – but still almost 700 species short of Arjan’s total. The magic 7,000 will be broken before too long. In case you are contemplating the challenge, it is worth noting that Noah was 28 when he started on his big year and Arjan was 30. Maybe I’ll stick with day-listing!