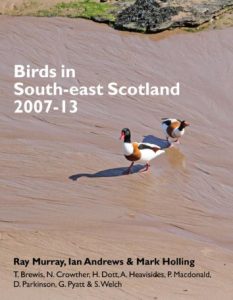 The compilers of this atlas must have breathed a collective sigh of relief on its publication, following the tragic death in 2016 of Ray Murray, who was its lead author and the key driving force behind the project. He would be justly proud of the book, as will be his colleagues.

After a short introduction and definition of the region covered, there is a substantial section on habitats. Such a large area (6,456 km2, equivalent to over 8% of Scotland’s land mass) encompasses a wide range of habitats, from the long and diverse North Sea coastline to large tracts of upland moor and forest. The main habitats are illustrated in a fine set of photographs accompanied by detailed maps. The fieldwork ran concurrently with the national Bird Atlas 2007–11, plus a further two years for completion. All 1,770 tetrads were surveyed in both breeding and winter seasons. A section on methodology explains coverage, followed by sections on population estimates and avifauna changes since the previous regional atlas (20 years earlier). The final introductory section on interpretation of the species maps precedes the species accounts themselves.

Although the earlier work mapped only breeding species, the relevant datasets for this season allowed valuable comparisons to be made. These feature prominently in the species accounts, which are well illustrated with splendid photographs. Species texts describe the facing tetrad maps and diagrams, discuss population data and compare the two regional atlases. The maps portray, where appropriate, breeding status, changes from the previous atlas, and winter distribution and abundance. Relief is depicted on each map, enhancing the value of the records. Abundance data are new to this atlas, being based on the tetrad counts for the national atlas. However, the accounts seem incomplete without abundance maps for the breeding season. This may be partly due to space considerations but, nevertheless, breeding abundance data would have been useful in highlighting the most important areas for each species. Non-breeders present in summer are inexplicably afforded such a map, even when there are only a few records. Smaller maps at the 10-km scale for both seasons convey the contrasts between the national atlases. These provide a quick reference to species’ range fluctuations during the past 30–40 years, although understandably hiding the more subtle variations shown on the tetrad change maps. Records of sensitive species are centralised within the appropriate 10-km square. Where applicable, Wetland Bird Survey (WeBS) counts illustrate both monthly and annual variations of wildfowl and waders, and extra data from this survey are shown in an appendix. With such contrasts in habitat and altitude (from sea level to 840 m), an opportunity was taken to record altitudinal changes for most species, between both the two regional atlases and the two seasons.

The changes over time are many and varied. The spread of the Common Buzzard Buteo buteo, Raven Corvus corax, Magpie Pica pica and Jay Garrulus glandarius, chiefly due to reduced persecution, and the increased urban nesting of Lesser Black-backed Larus fuscus and Herring Gulls L. argentatus are all evident. The range expansion of Buzzards shows a distinct shift to lower elevations. Declines in seaducks are related to improved water quality and the all too familiar losses in breeding upland waders are also clear. Other species, such as the Woodcock Scolopax rusticola, Kittiwake Rissa tridactyla, Short-eared Owl Asio flammeus, Marsh Tit Poecile palustris and Ring Ouzel Turdus torquatus, have also declined, and Corn Buntings Emberiza calandra are down to one pair. Set against this are the range extensions of Blackcap Sylvia atricapilla, Nuthatch Sitta europaea, European Stonechat Saxicola rubicola and Goldfinch Carduelis carduelis. Appendices include population estimates, which reveal that the Chaffinch Fringilla coelebs is top with 178,000 breeding pairs, followed by Wren Troglodytes troglodytes and Wood Pigeon Columba palumbus.

As with all repeat regional atlases on such a fine scale, this is an important and extremely valuable tool for conservationists. It is an absorbing read and a must for local birders and collectors of atlases.