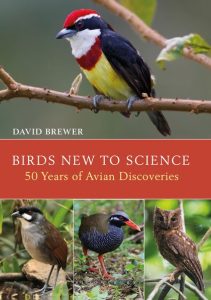 It seems that every few weeks a bird species is announced as being ‘new’ to science. In some cases (such as the Gran Canaria Blue Chaffinch Fringilla polatzeki) this is simply achieved through the promotion of a well-known subspecies to full species status. By comparison, the discovery of a completely new species that has gone undetected is still quite rare. The details of some of these have already appeared in the special additional volume of Handbook of the Birds of the World, which was published in 2013, detailing 69 discoveries since 1992. However, this new book looks back as far as 1960. Since that year, a total of 288 new bird species have been described, and this book sets out to catalogue the story of their discovery and what has been learnt about them since.

The first thing that struck me about these new species is that 51% of them were discovered in South America, compared with just 11% in sub-Saharan Africa and 9% in mainland Asia (although a further 15% were found in the islands in southeast Asia and the island comprising West Papua and Papua New Guinea). The second thing that I was astonished by was how few of these birds I’d heard of before reading this book. Indeed, a quick check against my personal world list showed me that although I have been lucky enough to see 76% of the world’s bird species, I have caught up with only 32% of the birds in this book! Of course, many have been known about for just a few years, and almost all have highly restricted ranges and are rarely seen. Indeed, some have not been seen since they were first discovered, and several are thought to be extinct already.

Yet a few of the new species are more widespread, and I was amazed that the Greater Yellow-headed Vulture Cathartes melambrotus was described only in 1964, with the discovery being made when a specimen from 1930 was examined. Others have been found and then lost! For example, what happened to the White-eyed River Martin Pseudochelidon sirintarae, the Red Sea Swallow Petrochelidon perdita and Vaurie’s Nightjar Caprimulgus centralasicus? And will DNA analysis be the undoing of Nechisar Nightjar Caprimulgus solala and White-chested Tinkerbird Pogoniulus makawai?

Each species is treated in the same way, with the story of the discovery being told along with a summary of what is known about its biology, habitat and distribution. In most cases at least one photograph of the species is shown. Some, such as the Pernambuco Pygmy Owl Glaucidium mooreorum, have never been photographed (and in that case not seen since 2001). In such examples I think it would have been interesting and perfectly acceptable to include a photograph of the type specimen instead. A description of each species is given, and readers who need further information are referred to the relevant type descriptions, which are listed in the extensive bibliography. Among the species featured, some 28 are owls, and 15 are tapaculos.

By his own admission, David Brewer has taken a very liberal approach when deciding which species to include in the book. If a taxon has been accepted by at least one of the major checklist authorities (IOC, Clements, Howard & Moore or HBW/BirdLife), then it is included. So, if you follow the IOC List, you will find several species in this book that you may never have heard of. Similarly, you may not recognise the species names used in a few cases. The view taken is that it’s better to include rather than to exclude – and I understand that.

Another chapter brings attention to about 50 taxa that are still awaiting formal recognition, acceptance and documentation as species new to science. Conversely, around 60 claimed species that are widely thought to be invalid are featured and reasons for their non-acceptance are given. Brewer also ponders on how many more species will be discovered in the years to come. A controversial issue is that of collecting specimens, and this is explored briefly, with both sides of the argument being examined.

The book comes with a strong conservation message. The sad fact is that most of the species that have been discovered in recent years are considered by BirdLife as either Vulnerable, Endangered or Critically Endangered.