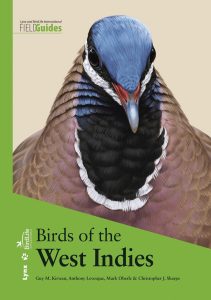 This is the latest offering in the Lynx and BirdLife International Field Guides Collection and covers all of the West Indies except Trinidad & Tobago and the Netherlands Antilles. These are excluded because their fauna is more closely linked to the South American continent rather than to the remaining 115 or so islands comprising the West Indies. This guide adopts the HBW/BirdLife taxonomy and uses existing illustrations from HBW – several of which have been improved specifically for this volume.

The West Indies are of great interest to birders for many reasons. Well over 700 species have been recorded and while c. 200 are very uncommon migrants or vagrants, around 190 species are endemic to the region. Most of the countries or significant islands have at least one endemic, but Jamaica tops the list with 32, followed by Cuba with 29. In addition to this, six families are confined to the region. On the negative side, around 60 species have been introduced to the islands over the years and some are flourishing at the cost of native bird species.

The West Indies have already lost several species to extinction in the last 200 years, and the book features four of these plus two others that may also be extinct: Ivory-billed Woodpecker Campephilus principalis and Semper’s Warbler Leucopeza semperi.

An introductory section explains the layout of the book and describes the region. It also suggests 29 locations to go birding across the island groups. There is much information on how the West Indies avifauna has been discovered over time, and how modern-day conservationists are trying to keep it safe. An appendix includes 36 species for which records are unproven or relate to likely escapes.

Species accounts of around 150 words discuss status, habitat and behaviour, age, sex and geographical variation and voice. Over 1,600 illustrations by 29 artists cover all of the species and distinctive subspecies, and for some families birds are shown in flight. Breeding and non-breeding plumages are shown in many cases and a QR code for each species links to the Internet Bird Collection gallery of photos, videos and sounds. There are around 650 full-colour distribution maps for all species other than the rarest vagrants.

This is another well-designed and fact-filled guide from Lynx. I am sure James Bond would have been impressed.