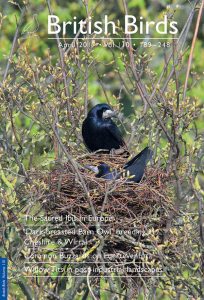 BB eye Why it is in the driven grouse industry’s interest to clean up its own act, by Martin Harper

The Sacred Ibis in Europe: ecology and management The adaptability of the Sacred Ibis means that it thrives in landscapes modified by human activity. In recent decades, non-native populations have become established in several areas of Europe. Such populations have the potential to establish and increase quickly, and thus to have a significant impact on native species.

Thriving Willow Tits in a post-industrial landscape The decline of the Willow Tit in the UK has made it a conservation priority species. Evidence is presented that in some areas of the UK, including a study area in the Dearne Valley catchment in Barnsley, Yorkshire, there has been an increase and colonisation over the past 25 years.