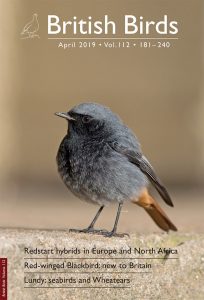 Redstart hybrids in Europe and North Africa An analysis of wild Black Redstart x Common Redstart hybrids from Europe and North Africa is presented, with an overview of distribution, phenology, habitat, biometrics, phenotypes and vocalisations. Primary spacing ratio and the presence of emarginations on P6 are useful identification features for hybrids, but there is substantial overlap with both parental species, and with Eastern Black Redstart.

Seabird recovery on Lundy: population change in Manx Shearwaters and other seabirds in response to the eradication of rats Lundy once supported large numbers of breeding seabirds, but declines during the twentieth century left the island with only remnants of its former colonies. This paper examines the results from the latest Manx Shearwater survey and how the species has responded since rats were eradicated from the island, in 2003–04.

BB eye  Why birders should be safe and sound