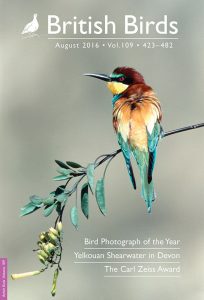 BB eye The plight of the world’s vultures, by Ian Newton

Yelkouan Shearwater in Devon: new to Britain A Yelkouan Shearwater seen off Berry Head, Devon, on 29th July 2008 by Mark Darlaston and Mike Langman has been accepted by BOURC as the first for Britain. This paper describes the circumstances of the record and the identification process.

Letters Kites and other raptors following the hay harvest