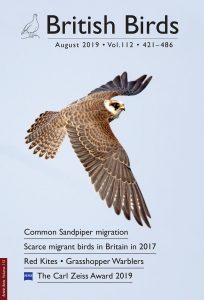 Report on scarce migrant birds in Britain in 2017 This report summarises the non-passerine scarce migrant birds recorded in Britain in 2017. Several wetland and seabird species appeared in record, or near-record numbers, though the factors influencing each species appear to differ. Black-winged Stilt makes its first appearance in this report, with a record 59 birds; while Cattle Egret, with a staggering 737 birds, has now become too widespread to monitor accurately and makes its final appearance. Lesser Scaup and Alpine Swift remain among the rarest species in this section of the report.