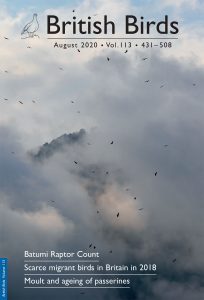 Batumi Raptor Count: from migration counts to conservation in a raptor flyway under threat  Autumn raptor migration through the Batumi bottleneck, on the eastern shore of the Black Sea in southwest Georgia, is notable for globally important concentrations of Honey-buzzards, Montagu’s, Pallid and Marsh Harriers and accounts for at least 1% of the global breeding population of ten raptor species. The Batumi Raptor Count project aims to expand its education and conservation remit while continuing to monitor one of the world’s biggest raptor migration bottlenecks.

Report on scarce migrant birds in Britain in 2018 Part 1: non-passerines  This report summarises the non-passerine scarce migrant birds recorded in Britain in 2018. It was the best year to date for White-billed Diver. Other species that put in strong showings were Surf Scoter, Ring-necked Duck, Glossy Ibis, Black-winged Stilt and Wilson’s Storm-petrel. Species faring less well in 2018 included Lesser Scaup and Kentish Plover; both are scheduled to return to national rarity status from 2020.

From the Rarities Committee’s files: Moult and ageing of passerines – an overview  An understanding of the process of moult is a fundamental part of being able to determine the age and often the sex of an individual bird; and this can be a key part of the process of identifying an unfamiliar bird. This article outlines the general principles of moult and gives an overview of different moult strategies in Palearctic passerines.