Thanks to the readers of BB and the generosity of individual donors, the British Birds Charitable Trust (BBCT) was able to donate over £21,000 to bird-related projects in 2018. The funding will support a broad range of topics, including assistance to young birders, ornithological studies and conservation and environmental projects.

With the Trust’s help, eight young birders have been able to spend time at bird observatories or participate in ringing or nestbox schemes. Support and encouragement for the up-and-coming generation of birders will continue to be a key aim of the Trust in future years.

Contributions have also been made to projects using the latest technology to monitor and track birds. Three of these use bioacoustics, a technique which is increasingly being used to study birds in hard-to-access locations. The projects will (i) monitor breeding Twites Linaria flavirostris in the UK’s uplands; (ii) determine the colony size of Barolo Shearwaters Puffinus baroli in the Canary Islands, where the species is restricted to inaccessible cliffs and small islets; and (iii) investigate the nocturnal displays and movements of Water Rails Rallus aquaticus, Moorhens Gallinula chloropus and Common Coots Fulica atra in Norfolk.

Continuing the ambition of ‘seeing in the dark’, another project will use miniature infrared cameras to study European Storm-petrel Hydrobates pelagicus and Puffin Fratercula arctica nests on Skokholm. Cameras will also be used to film nesting Common Swifts Apus apus in Cambridgeshire, with the aim of increasing public awareness of what can be done to help this rapidly declining species. A further two projects will use sensors to track the movements of two species, Red Kite Milvus milvus and the red-listed Arctic Skua Stercorarius parasiticus. GPS tags will be fitted to Red Kites to help establish why the population in northeast England is not increasing as rapidly as in other parts of the country, while both GPS tags and geolocators will be used to learn more about the foraging behaviour and wintering locations of Arctic Skuas breeding on Rousay, in Orkney. The Trust has also contributed to the European Breeding Bird Atlas, the results of which are due to be published in 2020, and will sponsor the BB logo species, the Red Grouse (or Willow Ptarmigan) Lagopus lagopus.

The third tranche of funding has been allocated to a variety of conservation and environmental projects. In the UK these include: (i) help with land purchase to extend the Sandwich Bay Bird Observatory, in Kent; (ii) assistance with management of Spurrell’s Wood, a 2-ha mixed woodland adjacent to Sustead Common, in Norfolk; and (iii) the construction of a clifftop seawatching observatory at Flamborough Head, in Yorkshire. Overseas, grants will help to extend the Becheve Reserve in southeast Nigeria (plate 31), while another will help conservationists to carry out an ornithological survey of the Donga Basin in eastern Nigeria. Support has also been given to an ambitious project by Oxford University students to clear 200 tonnes of plastic waste from Aldabra Atoll. The final BBCT project in 2018 continues our earlier support for the testing and implementation of the Hookpod. This is a clever device designed to save albatrosses and other seabirds by preventing them from being hooked during longline fishing for tuna and swordfish.

Our aim is to bring you news on these and earlier projects as it becomes available. Suggestions for future funding are welcomed, as are donations to help the Trust support them: contact [email protected] or write to the BB editorial office at Spindrift, Virkie, Shetland ZE3 9JS. 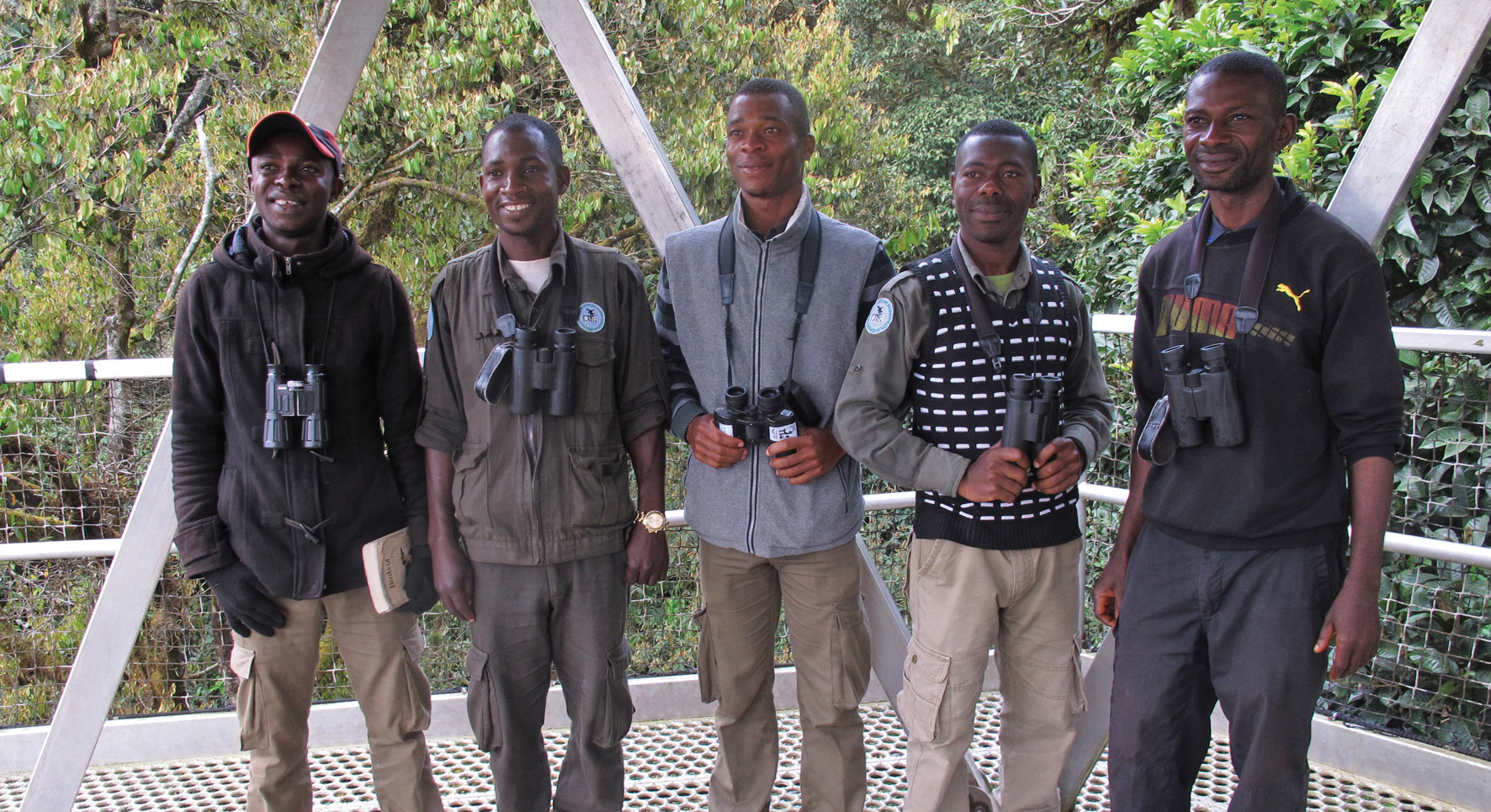 Becheve Nature Reserve wardens, Nigeria 2016. BBCT has given a grant (of £3,000) to the A. P. Leventis Conservation Foundation to extend the Becheve Nature Reserve. Situated on the Obudu Plateau, the reserve is important for Cameroon montane endemics and wintering Western Palearctic migrants. Richard Porter