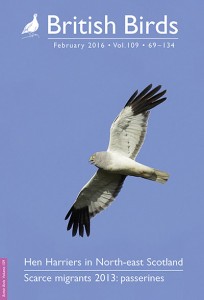 BB eye When the fox preaches, take care of your geese: the urgent need for international collaboration to manage migratory geese.

The past, current and potential status of breeding Hen Harriers in North-east Scotland The Hen Harrier recolonised North-east Scotland in the 1940s and expanded its population and range into the 1990s. Coordinated survey and monitoring during 1980-2014, together with supplementary records, identified 118 discrete breeding areas. The vast majority were on moorland managed for Red Grouse shooting. Peak numbers of at least 28 breeding pairs in the 1990s declined steadily to just 1-5 pairs in 2010-14. Illegal persecution and grouse-management practices are believed to be the main causes of that decline, which occurred despite ample suitable habitat and prey.

Report on scarce migrant birds in Britain in 2013: passerines This report presents data on the scarce passerine migrants recorded in Britain during 2013. It was a record year for three of the species concerned: Red-backed Shrike, Yellow-browed Warbler and Little Bunting. Among the species doing poorly were Aquatic Warbler and Tawny Pipit, with just one and four accepted records respectively, two species that were readmitted to the BBRC fold from the start of 2015.