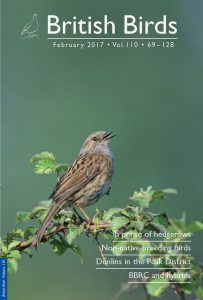 BB eye Driven grouse shooting – where next?, by Mark Avery

In praise of hedgerows Ian Newton argues that hedgerows add interest and diversity to the British countryside, and their importance to birds and other wildlife is well established. Across Britain as a whole, more than half of all the hedges present in the late 1940s have been removed, with a potential loss of up to five million pairs of breeding birds.

Non-native breeding birds in the UK, 2012–14 This report covers non-native species recorded breeding in the UK during 2012–14. A total of 25 species was recorded breeding or potentially breeding during this period. Numbers of the rarer species remain extremely small, with annual totals in double figures for only three species: Black Swan, Red-crested Pochard and Monk Parakeet.

Recovery of a breeding Dunlin population in the Peak District in response to blanket bog restoration Dove Stone, in the Peak District, is a partnership project between the RSPB and United Utilities, with management focused on biodiversity and water quality. Surveys showed that breeding Dunlins in peat restoration areas increased from 15 to 43 pairs between 2010 and 2015, which illustrates how peatland conservation management can help to restore populations of a declining wader.

From the Rarities Committee’s files: Hybrids, intergrades and BBRC The spectre of hybridisation has long haunted BBRC’s work. While some hybrids may be easy to identify, others may be much more subtle, and difficult to distinguish from normal variation in the parent taxa. This short paper seeks to clarify some of the problems and present a workable policy on hybrids and intergrades.