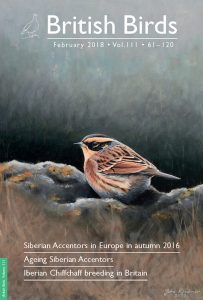 Siberian Accentors in Europe in autumn 2016 and the first British records Autumn 2016 was arguably the best ever for Siberian vagrants in Britain but it will be remembered most for the unprecedented influx of Siberian Accentors. This paper documents this extraordinary event, setting it in the context of a much larger arrival across northern Europe. It is suggested that the influx resulted from an unusual conjunction of meteorological factors but some other possible mechanisms are also discussed.

Ageing Siberian Accentors Almost 200 Siberian Accentors were examined in the hand, the majority of these being passage or wintering birds in eastern China in autumn. In autumn, most Siberian Accentors are possible to age in the hand. Differences in the pattern of juvenile and adult-type greater coverts are the most reliable feature for ageing, but supplementary characters involving the tertial pattern, tail feathers and iris colour are described.