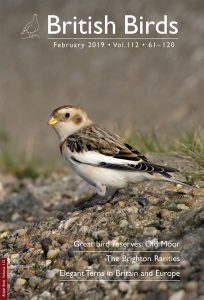 Great Bird Reserves: RSPB Old Moor and the Dearne Valley This article explores the history, creation, management and wildlife of RSPB Old Moor and the other sites that make up the Dearne Valley reserves in Yorkshire. In the 1980s, the area was a picture of dereliction’ now, the focus is on Bitterns Botaurus stellaris, breeding waders and helping people to engage with nature.

Before Bristow: The Brighton Rarities Abstract A series of records of rare birds from the Brighton area involved specimens that passed through the hands of Swaysland & Son taxidermists during the period 1854–84. Contemporary doubts over these records, which included several British ‘first records’, prompted reappraisal by BOURC.

From the Rarities Committee’s files: The Elegant Tern in Britain and Europe Abstract Elegant Terns have been occurring in Europe since 1974 and have reached Britain several times since 2002. This paper sets out the history of the British and European records and documents the long process of uncovering their true identity and admission to the British List.

BB eye  Raking over the past