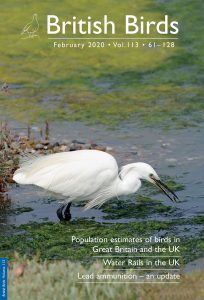 Population estimates of birds in Great Britain and the United Kingdom  This is the fourth report by the Avian Population Estimates Panel. Overall, there are thought to be about 84 million breeding pairs of birds in the UK, similar to the total in APEP 3(2013). The Wren continues to be the most common species, with a current estimate of 11 million pairs, which has increased since APEP 3. There are more than one million pairs of 20 species (23 in APEP 3) and these 20 species contribute 77% of the total (58% of the total is accounted for by the ten commonest species alone).

Water Rails in the UK – an estimate of the breeding population  There is good evidence that the breeding Water Rail population in the UK is higher than reported. Estimates from county recorders during 2016 and 2017 were used to derive an updated national total, of between 2,500 and 3,900 breeding pairs or territories.

The tide is turning for lead ammunition  Birds are poisoned by lead from ammunition, for example when waterbirds and gamebirds ingest gunshot mistakenly for grit or food. Despite global scientific consensus on the risks from lead ammunition, and the widespread availability of non-toxic alternatives, transition away from lead has been slow. In the UK, there is a conspicuous absence of political and regulatory action in the face of increasing evidence of the risks to wildlife and people.