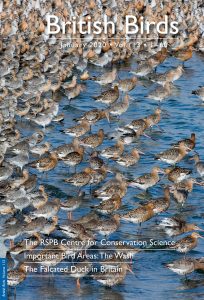 Important Bird Areas: The Wash The Wash, straddling the counties of Norfolk and Lincolnshire, is the most important estuary for wildlife in the UK. It supports a peak count of over 350,000 non-breeding waterbirds, including internationally important numbers of 17 species.

Falcated Duck in Norfolk: new to Britain This article describes the circumstances surrounding a male Falcated Duck at WWT Welney, Norfolk, in December 1986, and which reappeared there from August to October 1987. This individual has now been added it to Category A of the British List.

The Falcated Duck in Britain When considering additions to the British List, wildfowl are among the most controversial group of bird species for the BOURC to consider and this paper provides an account of BOURC’s treatment of this challenging file.

Letters  The sad exile of the UK’s leading ornithological library