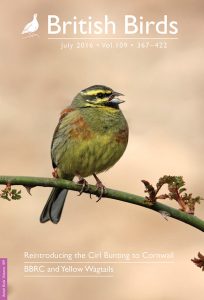 BB eye The Next Generation, by Stephen Moss

Reintroducing the Cirl Bunting to Cornwall A pioneering project to reintroduce the Cirl Bunting was carried out in Cornwall between 2006 and 2011. It involved the captive rearing and release of 376 young birds, taken from nests in south Devon. A breeding population is now established in the release area and at least 52 pairs were present in 2015. This paper describes the development of the work, from the initial planning stages, through to the adaptive management required to help to ensure that it was ultimately successful.

Co-operative attacks by urban Peregrines on Common Buzzards An update on the extraordinary behaviour unfolding in the skies above Exeter, as the Peregrines nesting on the church of St Michaels and All Angels in the city centre wage war on passing Buzzards