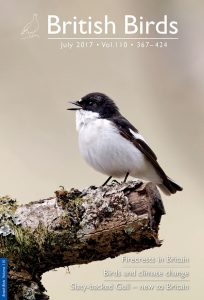 Firecrests in Britain A marked surge in the number of breeding Firecrests since 2000 is apparent in some parts of southern England. Intensive survey work in a large study area in the New Forest shows that number of pairs/singing males rose from 104 in 2009 to 498 in 2016. Based on this, further survey work elsewhere in Hampshire, data from the Rare Breeding Birds Panel archive and current knowledge of the species in other key counties, a new British population estimate is suggested.

The Bernard Tucker Memorial Lecture: Birds and Climate Change The subject of climate change is much discussed, and can polarise opinion like few other scientific issues. If the predictions from climate modelling become reality, then the world will change significantly, placing additional pressure on the biodiversity with which we share this planet. Changes in climate will affect the birds that we see around us, and their populations. This article summarises the evidence currently available

Slaty-backed Gull in London and Essex: new to Britain An adult or near-adult Slaty-backed Gull at Rainham landfill, Greater London, in January 2011, seen later at Wennington Marshes, Pitsea landfill and Hanningfield Reservoir, Essex, has been accepted as the first record for Britain. The discovery and identification of this individual are discussed, and the species’ distribution and vagrancy occurrences are summarised.

Notes Active predation on adult dragonflies by Little Egret; The pre-copulatory and mating behaviour of the Water Rail