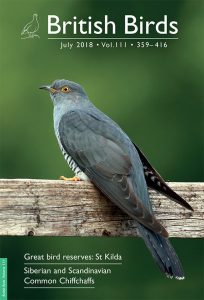 BB eye  Veganism: a plant-based diet has a bigger conservation impact than you think.  Sophie Channon

Great bird reserves: St Kilda  The islands of St Kilda are remote, spectacular and alive with many thousands of birds. As the only dual-status UNESCO World Heritage Site in Britain, St Kilda has a unique standing as a reserve for nature and culture. This article describes the history, management, wildlife and visitor status of the archipelago, with a particular focus on the islands’ birdlife.

Subspecies identification of Common Chiffchaffs wintering at Nigg Bay, North-east Scotland, in 2016/17 A notable concentration of wintering Common Chiffchaffs at Nigg Bay, North-east Scotland, is discussed. Six of the seven birds were trapped and ringed. Data from sound recordings and DNA suggest that all six are best treated as tristis. The wider implications for subspecies identification of Chiffchaffs in Britain are discussed.

Notes Great Crested Grebe catching hirundines; Kleptoparasitism of food-passing Marsh Harriers by a Peregrine Falcon; Great Skua feeding behaviour at sea off the Isles of Scilly; Nocturnal calling by a Pied Flycatcher on arrival in breeding habitat during spring migration