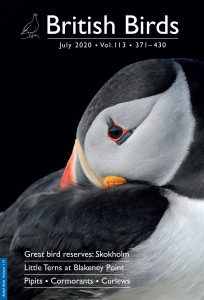 Great bird reserves: Skokholm The Pembrokeshire island of Skokholm is where Ronald (R. M.) Lockley carried out pioneering studies on the Manx Shearwater and, in 1933, opened the first bird observatory in Britain. Skokholm’s seabird colonies are of national and international importance and the island is also renowned for migrants and vagrants, and has several ‘firsts’ for Britain and for Wales to its credit.

From the Rarities Committee’s files: The Bardsey pipit A large pipit on Bardsey, Caernarfonshire, on 11th May 2016 was identified as a Blyth’s Pipit and accepted as such by BBRC. However, following correspondence from outside the Committee, the record was revisited and the bird reidentified as a Richard’s Pipit. This article describes the bird and addresses the identification issues raised.