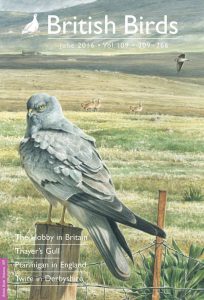 BB eye The environment and Europe, by Andy Clements

Thayer’s Gull in Essex: new to Britain An adult Thayer’s Gull at Pitsea Landfill, Essex, on 6th November 2010 is described and illustrated. This bird was eventually accepted as the first record of this taxon for Britain. Further records are discussed.

Twite in central England The small population in the Derbyshire Peak District now appears separated from the birds in the Pennines, at least in the breeding season. This paper reviews what is known about the Derbyshire population, both historically and currently.