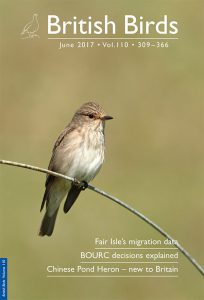 BB eye The UK’s wildlife overseas: a stocktake of nature in our Overseas Territories, by Sarah Havery and Laura Beasley

Fair Isle’s long-term migration dataset: origins, innovations and analyses Fair Isle is an internationally famous site for bird migration and the observatory staff have systematically counted migrants on a daily basis for more than 60 years, producing a long-term dataset comprising over one million records of 400 species. Recently, this dataset was fully digitised and FIBO began a new project to analyse the data. The first major analysis focused on the timing of trans-Saharan migrant songbirds, and the results are reported in this paper.

Chinese Pond Heron: new to Britain A Chinese Pond Heron Ardeola bacchus was present at locations in Hythe and Saltwood, Kent, in early 2014. After review, it was accepted onto Category A of the British List. This, along with other European records prompted the review of an earlier British record: an adult in breeding plumage in Norfolk, in October 2004. That bird was also accepted, and now becomes the first British record.

Recent BOURC decisions: Mugimaki Flycatcher and Chinese Pond Heron British records of Mugimaki Flycatcher and Chinese Pond Heron have presented BOURC with particular issues regarding provenance. This paper sets out the circumstances surrounding each claim, outlines the concerns that arose during the review, and in each case explains the process that led to the decision on categorisation.

Letters An illustration of fishing with Cormorants in nineteenth-century England; Only one species of Houbara? Buzzard incubating Mallard eggs

The rule of twenty-thirds by Adrian Pitches