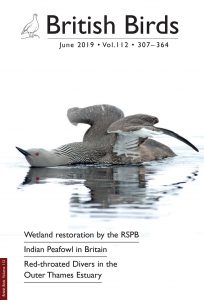 Wetland restoration by the RSPB – what has it achieved for birds?  During 1990–2015, the RSPB acquired around 8,750 ha of land on which to restore wetland habitat. This restored land now supports more than 10% of the UK breeding populations of Black-necked Grebes, Bitterns, Cranes, Avocets and Bearded Tits. It also supports a high proportion of the Lapwings, Redshanks and Snipes that breed on lowland wet grassland in England, Wales and Northern Ireland. The future challenges for wetland restoration are discussed.

A long-standing feral Indian Peafowl population in Oxfordshire, and a brief survey of the species in Britain  Indian Peafowl (Peacocks) were brought to Britain by the Romans. It is argued that some populations are self-sustaining and merit consideration for Category C of the British List.

BB eye  A woman in a bird recorder’s world

My patch  The Butt of Lewis