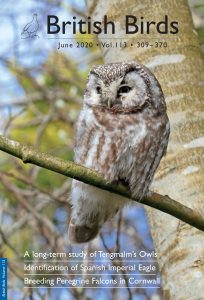 Highlights from a long-term study of Tengmalm’s Owls: cyclic fluctuations in vole abundance govern mating systems, population dynamics and demography  Results from a 47-year study of Tengmalm’s Owls in western Finland show that abundance of their main prey (Microtus and Myodes voles), and the three-year, high-amplitude fluctuations in vole populations, is fundamentally important in regulating the owl populations.

A significant decline of breeding Peregrine Falcons in coastal north and west Cornwall, 2015–19  The breeding population of Peregrine Falcons on the Atlantic coasts of north and west Cornwall appears to be declining dramatically. It is suggested that the primary cause of the population decline is an increase in adult mortality or emigration. Early indications from 2020 are that the observed decline is continuing.

BB eye  Agricultural policy – what does it mean for our farmland birds?

Letters  Do taxonomic changes affect conservation? The species status of the Red Grouse