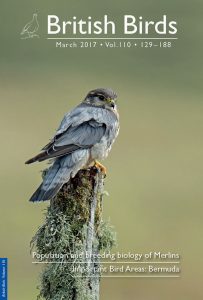 BB eye The Torrey Canyon – 50 years on, by Martin Heubeck and Tim Thomas

Population and breeding biology of Merlins in the Lammermuir Hills Merlins breeding in the Lammermuir Hills, in southeast Scotland, were studied from 1984 to 2014. In the last decade or so of the study, land management for driven grouse shooting intensified. Contributing factors to an observed decline in Merlin numbers may include failure to return to breeding areas but changes on the breeding grounds are probably most important, notably the effects of moorland management in the study area, for example through availability of suitable nest sites and on the Merlin’s favoured prey species.

Important Bird Areas: Bermuda Bermuda is a UK Overseas Territory in the western North Atlantic and was uninhabited before being settled by the British over 400 years ago. Despite its remoteness and its suburban landscape, it has a remarkable avian richness and history. The rediscovery of the breeding grounds of the Cahow, or Bermuda Petrel Pterodroma cahow, in 1951 made international news in an age without social media. Current threats to Bermuda’s biodiversity include climate change, the increasing frequency and intensity of tropical storms, and invasive species.

Letters The Golden Eagle – an enhanced future?; Buzzards and Pheasants; Time for a fuller signal search.

Notes A crèche of Shelduck and Avocet chicks; Great Cormorant and Grey Heron fishing in tandem; Audouin’s Gulls scavenging on the beach; Predation of Red Swamp Crayfish by Herring Gulls; Common Raven removing a dead chick from the nest.