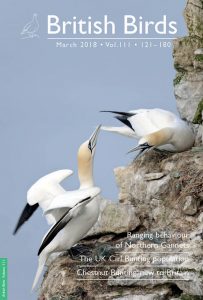 Ranging behaviour of Northern Gannets Adult Northern Gannets from Bempton Cliffs, Yorkshire, were fitted with satellite tags to investigate their ranging behaviour during chick rearing and the early post-breeding period. This study was carried out to establish whether there was overlap of areas used by Gannets with potential offshore wind energy development zones (OWEDZ) in the North Sea.

The UK Cirl Bunting population exceeds 1,000 pairs The latest full survey of breeding Cirl Buntings in the UK, in 2016, recorded an estimated 1,079 territories in 186 occupied tetrads. The UK population is still largely confined to south Devon but there is now a self-sustaining population of 65 pairs in south Cornwall, established through a reintroduction project. There is some evidence of natural recolonisation elsewhere in Devon and Cornwall.