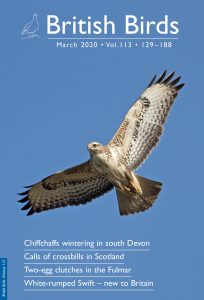 Chiffchaffs wintering at a sewage works in south Devon  Ringing of Common Chiffchaffs during three consecutive winters at a sewage works in south Devon revealed that the site supported a wintering population of at least 90 birds but capture–recapture models suggesting the true figure could be between 188 and 227. Many birds were site faithful, both within and between winters. Their sedentary behaviour may be driven by the continuity of insect prey.

Calls of crossbills in Scotland: association with bird size and changes over time  Crossbills of different average size in Scotland give different flight and/or excitement calls. Using calls to identify crossbills is less subjective than trying to discern small differences in bill size, and the results of this study may help observers who record crossbill calls.

White-rumped Swift in Yorkshire: new to Britain  On the afternoon of 14th October 2018, a White-rumped Swift was found at Hornsea Mere, Yorkshire. The record has been accepted by BBRC and BOURC and added to Category A of the British List.