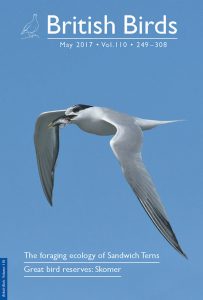 BB eye Getting our lists in order, by Jeremy Greenwood

Great Bird Reserves: Skomer Island Skomer Island has some of the finest seabird colonies in Britain, including the largest colony of Manx Shearwaters in the world, although most visitors come to see Puffins at what is the best site for this species in southern Britain. The monitoring of Skomer’s breeding seabird populations over more than 60 years has made a major contribution to our knowledge of North Atlantic seabirds, and the island has a long history of academic research on seabirds.

Recent reports and News & comment complete the May issue.