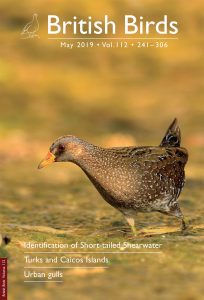 Important Bird Areas: Turks and Caicos Islands  The UK Overseas Territory of Turks and Caicos Islands in the West Indies is home to 58 native breeding species. These include six range-restricted species and two endemic subspecies: Thick-billed Vireo and Greater Antillean Bullfinch. The islands are also home to regionally important breeding colonies of gulls, terns and other seabirds. Threats to the islands, in particular to the nine IBAs, include the impact of alien invasive species, tourism and tropical cyclones.

News & comment and Recent reports complete the May issue.