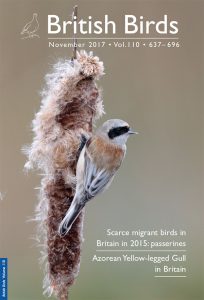 Report on scarce migrant birds in Britain in 2015: passerines The inexorable rise of the Yellow-browed Warbler continues, reaching yet another new high in 2015 (2,843 records). Numbers of ‘Siberian Chiffchaffs’ also reached a new high (351) and the same was true for Great Grey Shrike (375). Little Bunting (second-best year on record), Olive-backed Pipit (fourth) and Blyth’s Reed Warbler (fourth) were other species for which numbers remain high. Species in long-term decline include Ortolan Bunting and Melodious Warbler.

Interactions between Great White Egrets, Grey Herons and Cormorants in Norfolk During October 2016 two Great White Egrets were present at Holkham Lake in north Norfolk. Some of the behaviour described and illustrated here appears not to have been published before, at least in literature easily available to birdwatchers in Britain.