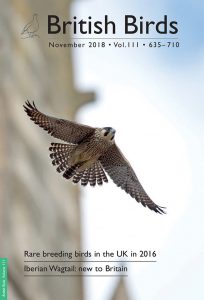 Rare breeding birds in the UK in 2016 This is the 43rd report published by the Rare Breeding Birds Panel (RBBP), and documents the status of 97 species of rare or scarce native birds that were recorded breeding, or showed signs of breeding, in the UK in 2016. The year was notable for the first successful breeding by Little Gulls and the first confirmed breeding by Bluethroats since 1996. National surveys of three species on the RBBP list were carried out in 2016: Capercaillie, Hen Harrier and Cirl Bunting.

‘Iberian Wagtail’ in Yorkshire: new to Britain A Yellow Wagtail of the subspecies M. f. iberiae at Filey, Yorkshire, on 22nd April 2015 has been accepted as the first record of this taxon for Britain. This account describes the observations, vocalisations and photographic evidence that contributed to the identification of this widely anticipated southern European overshoot, along with the circumstances of the record and an analysis of the occurrence in a wider context.

BB eye  Ian Newton on the value of cow dung