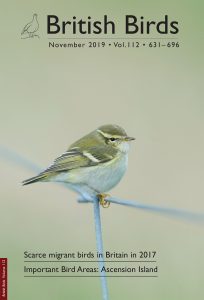 Report on scarce migrant birds in Britain in 2017: passerines  This report presents data on scarce passerine migrants recorded in Britain during 2017. Red-flanked Bluetail makes its first appearance in this report but with just six records in 2017 it was an inauspicious beginning. In contrast, there was another strong arrival of Yellow-browed Warblers in autumn, an annual total of c. 1,950 making it the fourth-best year. A good run of late-autumn migrants, mostly from northern Europe and Siberia, was one of the few high points of an otherwise mediocre year for many species.

Important Bird Areas: Ascension Island  Ascension Island is a UK Overseas Territory in the tropical South Atlantic that supports regionally and globally important nesting populations of 11 seabird species. Prior to human settlement in 1815, Ascension was home to millions of seabirds, but the introduction of cats resulted in rapid population collapse. A seabird restoration programme began in 2001 and since the eradication of feral cats, seabirds have resumed nesting on the mainland in significant, and still-increasing, numbers.