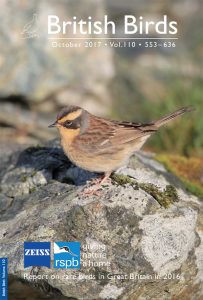 This is the 59th annual report of the British Birds Rarities Committee (BBRC). Remarkably, Chas Holt’s first report as Secretary includes seven new species for Britain, together with a new first record of a previously accepted species and two new subspecies. Perhaps the highlight of 2016 was the extraordinary arrival of no fewer than 13 Siberian Accentors, one of those species new to Britain; the other additions to the British List are Red-footed Booby, Western Swamphen, Acadian Flycatcher, Eastern Kingbird, Pale-legged Leaf Warbler, ‘Caspian Reed Warbler’, ‘Spanish Wagtail’ and Chestnut Bunting.