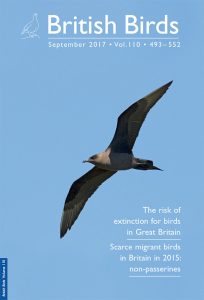 The risk of extinction for birds in Great Britain A team of bird conservation experts has carried out the first formal IUCN assessment for birds in Great Britain. Of the 241 species assessed, 100 (43%) had at least one population (breeding and/or non-breeding) that qualified as Threatened using the standard IUCN Red List criteria. Both Golden Oriole and Fieldfare were assessed as being Critically Endangered (Possibly Extinct) as breeding species, in addition to seven species that are already extinct (either Extinct or Regionally Extinct).

Report on scarce migrant birds in Britain in 2015 The 2015 report marks the first appearance of Lesser Scaup as a scarce migrant rather than national rarity, but with just six new arrivals in 2015 it was a slow start. In contrast, and with 371 new arrivals and an increasing breeding population, the Great White Egret reached another new high with which to mark its final appearance in this report. It was also a record year for American Wigeon (with 32 new arrivals), Red-necked Phalarope (81) and European Bee-eater Merops apiaster (193) – these figures excluding breeding birds.

Letters Firecrests in Wiltshire; Are Willow Tits really thriving? – a reply; The Duchess of Bedford