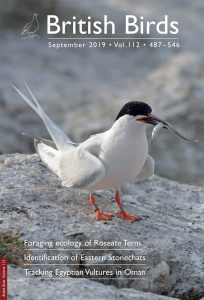 From the BBRC files: ‘Eastern Stonechats’ in Britain  This paper summarises the current knowledge of stonechat taxonomy, and the identification and British status of the three ‘Eastern Stonechat’ taxa that are known to have occurred here, with particular reference to the appearance of genetically sampled individuals in Britain and Europe. It also sets out BBRC’s approach to identifying and recording ‘Eastern Stonechats’.

The Curlew summit  A meeting to discuss the pressing conservation issues surrounding breeding Curlews in the UK was held at No. 10 Downing Street on 8th July 2019. It was attended by representatives of conservation NGOs, game and landowning interests, as well as ornithologists closely involved with the Curlew.