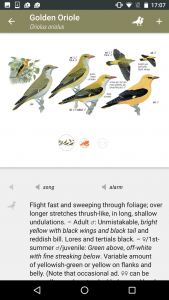 Available from the Google Play Store, £12.99

The Collins Bird Guide is widely regarded as the finest field guide ever produced and it is likely that most readers will already own a copy of the second edition. Users of mobile devices running Apple’s iOS operating system have had access to a Collins Bird Guide app for several years but those with devices running the Android operating system have had a long wait for an equivalent version. This situation is now remedied.

Those familiar with the iOS version will find the Android app very similar indeed. The full text (including introductory material), maps and illustrations are provided and with just a little practice it is actually quicker to find what you want here than by thumbing through the book. There are few instructions, but then few are needed: the interface is pleasantly intuitive and as with most ‘tech’, just playing around and pressing various icons is the simplest way to learn. The reproduction of the illustrations is of the highest standard and they can be enlarged to a size greater than in the standard format book on even a modestly sized phone screen. One purchase will allow the app to be added to both a phone and a larger device such as a tablet, allowing the fine detail of the illustrations to be appreciated fully.

One quibble is that the text size cannot be altered, meaning that some will have to reach for their reading glasses, although the same could be said of the paper version, in which the text size is actually slightly smaller than on a typical mobile device.

There are two major advantages compared with the book. One is portability – you can literally have it with you at all times – and the other is additional features, most notably the inclusion of sounds for many species, often including multiple types and variations. Written descriptions of sounds, even when as impressively crafted as in the book, simply cannot compete with an actual recording of what is being described. In many cases the recordings are excellent but I was a little disappointed by some, [‘Either’ should be used with just two things and there are three here.] because they were so brief, were of rather low quality (with too much background noise), or because they were not actually the most useful or relevant sounds for identification purposes in a European context. For example, there are three cuts, two of calls and one of song, of Blyth’s Pipit Anthus godlewskii; song is unlikely to be of much use to birders in Europe while neither of the two calls is actually the ‘pshiu’ call, the significance of which is flagged in the written voice description. The addition of sounds inevitably comes at a cost in terms of the size of the app, which at 800 MB is rather large, so a more rigorous selection process could have been used, with more emphasis on sounds that are actually likely to be most beneficial in enabling identification. The recording of the eerie call of Zino’s Petrel Pterodroma madeira, evocative though it is, is unlikely to lead to a correct identification, the space taken up by this and several other ‘luxury’ recordings could I feel have been better used. Such qualms are not restricted solely to the Android version; the same recordings appear to be used in the iOS version too. High-quality recordings of the most useful vocalisations of the species covered are now available so an overhaul of those currently presented is conceivable; being a digital product this could be done relatively simply via a future update. One paid update already available is for maps for 271 species from the BTO 2007–11 Bird Atlas, a proportion of the revenue going to the Atlas producers.

The stability and reliability of digital media is sometimes an issue but after several months of regular use I have had no problems whatsoever while running this app, even though the main device used, a Samsung S5, is hardly state of the art in smartphone technology. All in all, this is a fantastic product. If you have a compatible device, I cannot think of a single good reason not to have it.