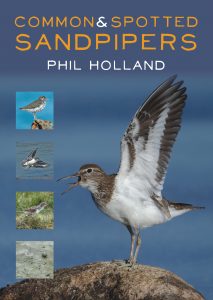 For a shorebird enthusiast there can be few more intriguing species-pairs than the Common Sandpiper Actitis hypoleucos and the closely related American Spotted Sandpiper A. macularius. The two species are closely similar in size and behaviour, both show a characteristic flicking, bow-winged flight, while the differences in structure and calls are only very slight. Another notable similarity is the distinctively patterned underwing. Given the similarities, it is curious that the Common Sandpiper has similar plumages year-round and a simple monogamous breeding system, while the Spotted Sandpiper not only has strikingly spotted underparts when breeding but also practices serial polyandry; the female often lays several clutches in succession for different males to incubate.

With this background, I approached this book with great interest, knowing that the author, together with the late Derek Yalden, has spent many years carrying out field studies of breeding Common Sandpipers in the UK. The title suggested that there would be a detailed comparison of the behaviour and lifestyles of the two species, and that, together with North American research on the Spotted Sandpiper, the book would provide at least some explanation for the interesting differences between the two species.

The book has nine chapters that cover most aspects of their lives, including breeding behaviour, migration, behaviour in the non-breeding areas, feeding, predation and competition, populations, the longer-term history of Common Sandpipers, plus several appendices and a comprehensive list of references. Two separate chapters deal with southbound and northbound migration, and include the result of geolocator studies, showing that a Scottish Common Sandpiper took a largely coastal route southwards to West Africa and a more inland route on the return. Both migrations, of adults and juveniles, are considered in some detail for Europe and Asia, including the routes taken and the differences between autumn and spring, but there is less detail for Spotted Sandpipers in the Americas since less is known. Most individuals, of both species, move in a series of short hops, with longer flights only when crossing significant barriers such as the Sahara.

‘Wintering’ behaviour includes details of moult, numbers, and return dates; the female Spotted Sandpipers return before the males as they need to establish a breeding territory where they will lay their successive clutches. The converse seems likely to apply to Common Sandpipers, where the males probably return sooner than the females.

A chapter on feeding summarises what is known of their food and feeding techniques, while predation and other hazards are the subject of another chapter.

Both the copy-editing and proofreading leave something to be desired. Frustratingly, I often found myself re-reading sentences as I had difficulty understanding what was being said, and in several places there are ambiguities as to which species is being referred to, particularly since the context sometimes suggests that it may be a species other than Common or Spotted. And there are a quite a number of minor errors that would have been picked up with more careful proofreading.

That said, the book is a real compendium of information on the two species and will be a very useful addition to any shorebirder’s library. The general conclusion is that in practically every respect Common and Spotted Sandpipers are very similar. The only major differences really do seem to be that they have different breeding strategies and different breeding plumages! The author discusses in some detail possible reasons for the evolution of the Spotted Sandpiper’s serial polyandry, suggesting that it has arisen in the context of a good food supply, low predation and weather conditions that favour incubation by a single parent. Such conditions appear to be available to the Spotted Sandpiper in North America, but apparently not to the Common Sandpiper in Europe and Asia. But there is no discussion as to why the Spotted Sandpiper has evolved its eponymous breeding plumage!