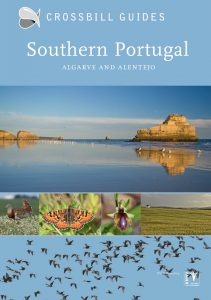 By Dirk Hilbers and Kees Woutersen

Covering an area roughly 110 x 180 km, southern Portugal is a superb, wildlife-rich destination. The landscape of the Algarve and its northern neighbour, the Baixo-Alentejo, is diverse and includes cliffs, dunes and tidal marshes on the coast to the extensive oak pastures, steppes and rocky hills in the interior. There is less of interest in the Lisbon/Setúbal area with its built-up city – home to over three million people, but even that is not without wildlife sites. Whether you enjoy birdwatching, searching for orchids or simply a pleasant ramble through the steppes or cork and holm oak forests, southern Portugal is a great destination at any season, and with its honey-coloured sea cliffs it is often known as the ‘golden coast’.

This book follows the now familiar layout of previous Crossbill Guides. Beginning with a description of the landscape and local history, including the impacts on nature conservation, each of the principal ecosystems are explored including discussion of geological features that affect wildlife. The following section describes the wildlife that may be encountered – flora, mammals, birds, reptiles, amphibians and invertebrates. The final section contains outlines of 23 routes and 29 site descriptions south of Lisbon. Particular attention is paid to birds, especially within the eight Important Bird Areas in the region and a significant coastal passage of seabirds as well. Among the sought-after species are Pin-tailed Pterocles alchata and Black-bellied Sandgrouse P. orientalis, Great Otis tarda and Little Bustards Tetrax tetrax and Lesser Kestrel Falco naumanni. There is also a special focus on orchids, of which 38 species are found, particularly in areas such as Cabo São Vincentina.

The routes described are aimed at those with transport, and range from a few hours to a full day, sometimes covering up to 80 km. If you tried to visit all of the locations included here, you would need to spend at least two weeks in the area. Small route maps annotated with stopping points are included, and many of the typical species are listed.

Finally, additional notes describe how to find particular species groups, such as orchids, and there are detailed notes on the status of selected bird species, plus a series of checklists. These are listed alphabetically in English, German and Dutch, and include scientific names. They are, however, not exhaustive and refer to those species mentioned in the text rather than aiming to be comprehensive; around 280 bird species are mentioned, about 210 species of plants and 110 invertebrates. No index is given, so it is not possible to find your way back to every species listed.

Maps and numerous photographs are scattered throughout. Once again Crossbill have managed to put the spotlight on an area that deserves more of our attention.