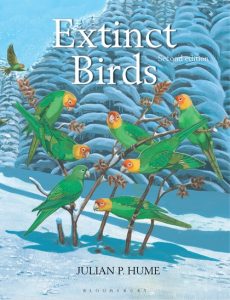 It is just five years since I reviewed the first edition of this book (Brit. Birds 105: 336–337), which had two authors, Julian Hume and Michael Walters. I decided it was ‘…a superb work of ornithological scholarship which will surely become the standard point of first reference for years to come’. This new edition undoubtedly merits exactly the same judgement.

It is 160 pages longer than its predecessor, with another half-dozen pages of references added to the original 69, representing five more years’ worth of painstaking investigation and a lot of updating. Over that period, the depressing news is that 48 species and seven subspecies have joined the list of extinctions, but there is some small comfort from the fact that two species and 21 subspecies have moved to the ‘rediscovered’ list. I wish that a simple list or table had appeared in the preface to the new edition to show which taxa are involved here – it would have made the job of reviewing the changes much easier. A price increase of £10.00 may seem a bit steep, but my guess is that it is worth it. I wonder what the next five years will bring…