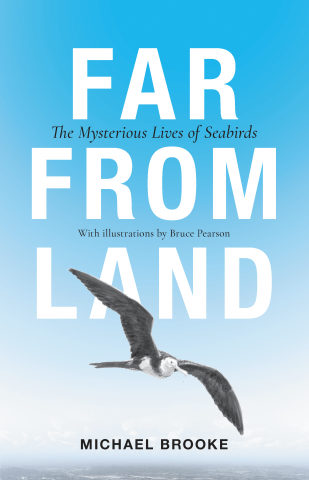 It doesn’t seem so long ago that Letraset was essential in describing the movements of seabirds, which involved laboriously scraping symbols onto outline coastal maps to plot the distribution of recoveries of ringed birds, mostly found dead on a beach somewhere close to human habitation and usually ringed as a chick. As pointed out in the introductory chapter to this immensely readable book, the biases involved in interpolating seabird movements from ringing recoveries are considerable, and of course such information tells us nothing about what the individual did, or even where it went, in the often long interval between ringing and death. Neither does ringing tell us anything about the many individuals that die and disintegrate far from land, their metal rings ending up in the abyssal depths. Don’t get me wrong, ringing still has its place, but the technological revolution of the past 20–30 years has fundamentally expanded our understanding of what seabirds do while far from land – where they go and what strategies they adopt to enable them to survive for decades.

From radio-tracking in the 1980s of parent birds foraging near colonies, soon followed by attaching satellite transmitters to albatrosses wandering the southern oceans, devices now exist that not only tell a researcher where an individual seabird is at any one time but how high it is flying, and whether or not it is sitting on the sea, at night or during the day. Underwater, diving depths, foraging patterns and heart rates can be measured, and temperature sensors can even record when something cold (i.e. prey) enters the stomach. At the colony level, accurate counts of nests can be made using photographs taken from drones, while satellite imagery has been used to identify the location and size of remote and previously unknown penguin colonies in Antarctica. Keeping abreast of all these developments in the published literature is challenging, and Mike Brooke has done seabird enthusiasts a huge service by synthesising the subject in one volume.

Mike is perhaps best known to the birdwatching community for his studies of Manx Shearwaters Puffinus puffinusand his monograph of that species, and but his long academic career, specialising in procellariforms, has taken him to many remote islands around the world. So he is well placed to tell this story. His writing style is a delightful combination of ‘authoritative’, ‘easy’, and ‘entertaining’ with little autobiographical anecdotes and gentle digs at fellow researchers peppering up the text throughout. In a cleverly sequential series of chapters he describes the challenges facing a wide variety of seabird species and their coping strategies, as they leave their natal colonies for the first time, learn how to survive on their own until mature, make regular migrations between one part of the planet and another, become tied to their colony during the breeding season, use wind and waves for efficient travel, and make choices on where best to forage. A penultimate chapter describes how seabirds catch their food (yes, strap-on cameras have revealed a lot), while the final chapter (‘The Clash’) deals with seabird interactions with people, past, present and future.

I can thoroughly recommend this book, which I’m sure will appeal to the lay public and to veteran seabird researchers alike (just read their comments on the back of the dust jacket – almost a seal of communal Royal Approval). The production is nice, with a sturdy cover, heavy paper and easily readable font size. Evocative vignettes by Bruce Pearson are scattered throughout, and I found the rear flap of the dust jacket useful in keeping track of the references, which are listed numerically by chapter before a comprehensive index. If you are interested in what seabirds do and why they do it, as opposed to what they simply look like, then buy this book – you’ll have a very entertaining and informative read.