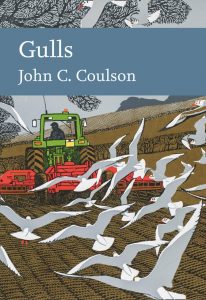 As might be expected, this book is a brick of information about the resident gulls of Britain and Ireland. It starts with an ‘Overview of Gulls’ covering such topics as taxonomy and various aspects of their life-history strategies. This overview is pretty comprehensive, and with larger type and more photos could easily have been published stand-alone. In this case, however, it is the prelude to nine chapters each dedicated to a single species: Kittiwake Rissa tridactyla, Black-headed Chroicocephalus ridibundus, Little Hydrocoloeus minutus, Mediterranean Ichthyaetus melanocephalus, Common Larus canus, Herring L. argentatus, Yellow-legged L. michahellis, Lesser Black-backed L. fuscus and Great Black-backed Gulls L. marinus. All the others recorded in Britain are covered in a chapter on ‘Rare Gulls’. These are followed by three chapters on research techniques, urban gulls and, finally, the conservation, management and exploitation of gulls.

The chapters dedicated to individual species constitute the bulk of the book. This is not an identification guide, but these chapters summarise what the birds look like, then go through such subjects as distribution, breeding, moults, movements and diet. The chapters effectively assemble and condense the body of scientific research carried out on these species, and are liberally punctuated with graphs, histograms, tables and photographs. It sounds dry, but for the most part it isn’t. There is a lot of information, quite dense in places, but the text is interspersed with interesting comments, case studies and anecdotes that keep things moving along. The text is authoritative, founded in a deep personal knowledge of gull research, and bang up to date, describing for example the controversy surrounding the death of Kittiwakes on netted buildings in Newcastle in summer 2018.

The ‘New Naturalist Series’ mission statement – ‘to interest the general reader in the wildlife of Britain by recapturing the enquiring spirit of the old naturalists…’ – seems increasingly quaint and parochial but, more importantly, appears to impose a constraint on the authors such that the amount of chapter space allotted to each species roughly correlates with its British breeding population. So, for example, while Herring and Lesser Black-backed Gulls and Kittiwakes get 50–60 pages each, the equally fascinating Little Gull gets only eight pages, while such ‘normal’ species as Sabine’s Xema sabini, Glaucous L. hyperboreus and Iceland Gulls L. glaucoides are relegated to the ‘Rare Gulls’ chapter, alongside the likes of Laughing Leucophaeus atricilla and Franklin’s Gulls L. pipixcan. It would not be possible to give every species the full treatment in a single volume, but neither gulls nor science respect the English Channel as a barrier and it gives the book an oddly unbalanced feel.

The book is written for the interested reader who wants to know more about gulls but does not want to research them in depth. It is a difficult tightrope to walk, but the author is broadly successful. Only the very interested reader is likely to sit down and read the entire thing in full, but the chapters are mostly self-contained and can be dipped into. The chapters on urban gulls and gull management are particularly topical (see for example the recent paper by Sarah Trotter in BB 112: 282–292) and the author makes a well-argued case that gulls are drawn to towns and cities not for the free food, but for the safer nest sites. Gull management is discussed in that context, with apparently little patience for the hyperbole that Herring Gulls are in danger of extinction in Britain. The most recent addition to the New Naturalist Library is full of stuff like this, and few BB readers will regret giving it a few hours of their time.