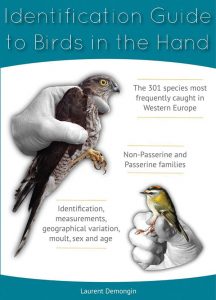 Ringers have always relied on guides that provide specific biometric and ageing criteria to ensure that they correctly identify, age and sex any bird they capture. In this new guide, Laurent Demongin has brought together a wealth of information on the 301 species most frequently caught in western Europe (154 non-passerines, 147 passerines). In addition, a further 249 infrequently captured species (including vagrants from Siberia and North America) are included in less detail for comparison with similar but more regularly encountered species. Originally published in French, this English version has been updated and expanded to include detailed treatment of an extra 51 species, along with additional information including schematic figures of moult sequence, BTO and Euring codes and a short list of references, although the full bibliography consulted is available only online.

The layout is simple and straightforward, commencing with seven introductory chapters addressing a range of topics including terminology, measuring methods, moult, sexing and age criteria. Individual species accounts follow, which cover the identification and comparison with similar species where relevant, then work through measurements, geographical variation, moult, sex and age. Most species accounts include one or more black-and-white photographs, line-drawings or diagrams: some are relevant to a species’ identification or extent of moult, others illustrate particular feathers or feather tracts used to determine age. For almost every species a simple line chart illustrates the chronological moult progression over a three-year period, making this data readily accessible and understandable. Distribution maps are also provided for a handful of species including the races of Dunlin Calidris alpina and Yellow Wagtail Motacilla flava, and European large white-headed gulls.

Inevitably, this guide will draw critical comparison with Lars Svensson’s Identification Guide to European Passerines, last updated in 1992. For over 40 years, this has been the ‘gold standard’ and there can be few European ringers who haven’t used a ‘Svensson’ at some point. For many it is a familiar and friendly reference and the first place to turn to when sexing or ageing an unfamiliar passerine. This new guide takes users beyond where Svensson left off and into the next era, and includes much more that has come to light in the 25 years since the last Svensson update.

So how do the two guides compare? The provision of in-hand biometrics data to aid passerine identification is similar in both guides. The Demongin guide includes an additional 154 non-passerines that Svensson doesn’t address, although some of these are included in BTO guides to European non-passerines and waders. Moult charts, absent from Svensson, neatly illustrate moult timing and progression throughout the year. Precise information on racial variation and separation from similar, unfamiliar species is explored in greater detail by Demongin and will prove invaluable, particularly at coastal ringing sites where unfamiliar species are more likely to be encountered.

Will the Demongin guide become the new Svensson and displace it as the ringers’ guide of choice? On the face of it, it certainly appears to tick all the boxes and provide much of the quality information one could possibly need to process a bird in the hand. But in trying to make this guide portable and sufficiently small to fit into a ringer’s kit box, the layout has suffered. Line spacing is minimal, font size has been reduced to the almost indecipherable, the text is particularly faint and I needed a magnifying glass to read it. Compared with the larger font and clarity of Svensson, these apparent minor failings may be a serious handicap for that generation of ringers whose eyesight is not what it used to be. In A4 format it would be far more user-friendly, and perhaps this is something that might be addressed in future?

This guide will become an essential reference in ringing labs and observatories. Non-ringers will also find it a great resource, to improve their understanding of techniques used to identify, age and sex birds in the hand, some which rarely appear in field guides. And even those familiar with moult will find the moult progression charts illuminating. Just keep your magnifying glass handy.