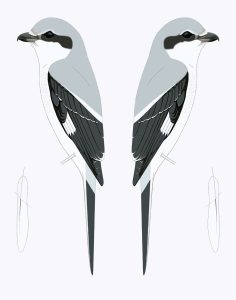 It’s winter and ‘the’ local Great Grey Shrike Lanius excubitor is back – but is ‘the’ Great Grey Shrike really the same individual returning for its umpteenth winter, or are some sites simply more attractive to wintering shrikes than others? In Identities, Martin Brandsma presents more than 150 illustrations (coloured morphological drawings; see www.martinbrandsma.nl/identities) of Great Grey Shrikes from 58 sites in northern Netherlands over the course of five winters. There is no text, other than a single-page guest foreword, but the illustrations speak for themselves. Brandsma has observed and drawn the birds in such detail that individual traits can be tracked from one year to the next: the Rottige Meente Munnekeburen shrike, for example, appears to be the same individual reappearing from 2011/12 right through to 2015/16. On the other hand, an adult bird wintering for two years at Leggelderveld is replaced part-way through the study period by a first-winter bird; while an adult wintering at Schietbaan from 2011/12 to 2013/14 is replaced by a different adult in 2014/15–2015/16.

While 120 pages of nothing but grey shrike graphics may not be everyone’s cup of tea, it does offer an insightful view into the variation within the species and shows the potential for what can be done with an intensive observational study of a single species. It also goes to show that, with some close observation, ‘the’ local Great Grey Shrike may not be the same bird after all!