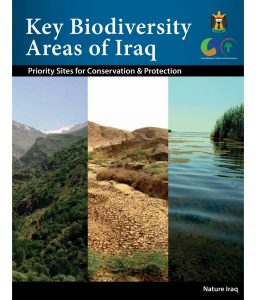 Some books impress the reader more by their very existence than by their quality, and a few impress equally on both counts. This is one of those books. Most people will associate Iraq with its terrible recent history: the two Gulf Wars, the persecution of the Kurds, the toppling of Saddam Hussein and the rise and fall of the violent factions that filled the ensuing power vacuum. If people think about Iraq’s biodiversity at all, they think of the draining of the Basra Marshes and the displacement of the Marsh Arabs (Maʻdān) and their unique culture. All these negative associations are immediately challenged by this remarkable book, which reminds us both of the spectacular biodiversity and extraordinary beauty of Iraq and of the indomitability of the human spirit. Between 2004 and 2012, Nature Iraq, an Affiliate of BirdLife International, and the Iraq Ministry of Health and Environment coordinated teams of fieldworkers to collect information from across the country to ‘identify areas of outstanding global or regional importance for their biodiversity and to provide a foundation for developing a protected area network in Iraq’. In doing so, they used a novel approach based on the Key Biodiversity Areas (KBA) concept. KBAs build upon the highly successful Important Bird and Biodiversity Areas (IBA) initiative, to provide a means of identifying important sites for all elements of biodiversity. At the time of the fieldwork, the new IUCN KBA Standard had still not been launched (it was first published in October 2016), so the team adopted a three-pronged approach, bringing together interim KBA criteria (to identify sites important for non-avian fauna), the IBA criteria and the Important Plant Areas (IPA) criteria. In doing so, they have produced the first national KBA book ever published, anywhere. That this could have been done at a time of such political unrest and insecurity almost beggars belief.

If the background to this book is extraordinary, so too is its quality. There are so many good things that it is hard to know where to start. The introductory chapters are excellent. This book is not simply a list of the sites identified, it is a full analysis of Iraq’s biodiversity, from snow-capped mountains in the north through steppe, desert, river and marsh to the country’s short (58 km) coastline, illustrated throughout with high-quality colour photos, maps and summary tables. Chapter 2 provides a succinct history of Iraq and description of its major biogeographical zones. Chapter 3 gives a detailed description of nature conservation in Iraq, from its legal basis to its commitments under international agreements and the government’s approval of Iraq’s first national park, in the Central Marshes. Chapter 4 gives an introduction to the methods used in the KBA assessment, including how threats were assessed and how data were validated. Chapter 5 gives an overview of the results of the inventory, summarising the distribution of sites and the threats they face. Of the 82 KBAs identified by the project, which between them cover 7% of Iraq’s land area, 39 meet KBA criteria for non-avian fauna, 68 meet IBA criteria and 72 meet IPA criteria. All these introductory chapters are then brought together in a short but concise summary that provides a number of strategic actions to protect Iraq’s wildlife for the future.

Chapter 7 then documents the 82 KBAs in turn, describing each site’s major habitats, land use and soil types before moving on to its importance for biodiversity. A table shows the species and populations that qualify under each of the three sets of KBA criteria, and further sections describe the site’s other important flora and fauna, conservation issues and recommendations (‘mine clearance’ occurs with depressing regularity). Helpfully, the map of the KBA’s boundary is shown superimposed on a Landsat satellite map so the reader really gets a feel for the site. Threats to the site and their importance are shown in a neat graphic, which I predict will be much copied. The book concludes with a series of useful appendices and references. The quality of presentation throughout is exemplary, and the mouth-watering photographs of the sites will leave many adding Iraq to their ‘must visit’ list until such time as the country’s current problems are resolved.

This truly extraordinary book sets the standard for what I hope will be a flood of national KBA inventories in the future. If Nature Iraq and their many colleagues and helpers can achieve this in the incredibly tough times they have had to live through, there’s no excuse for anyone else not to rise to the challenge. Anyone wanting to learn more about this country’s fantastic biodiversity, or who simply wishes to support and celebrate the achievements of a remarkably brave and dedicated group of conservationists, should buy a copy of this book.