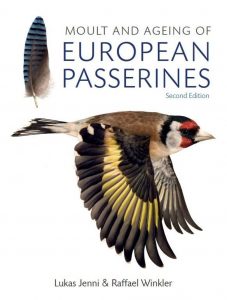 By Lukas Jenni and Raffael Winkler

For me, the first edition of Moult and Ageing of European Passerines (or simply ‘Jenni & Winkler’, which it is usually referred to as), published by Academic Press in 1994 (and purchased second-hand at great cost), has been one of the most important ornithological references in my library. A reprint issued a few years ago was dogged by printing issues, something that the publishers attributed to not having the original photographs. The second edition is, therefore, much anticipated. While the first edition has stayed fresh and relevant, it is now past its 25th birthday – and a lot of new moult studies have been published in the intervening years.

The second edition is about 50% thicker than the first, with the number of species rising from 58 to 74. The authors are based in Switzerland and the species list certainly has a central European bias but the majority of species are of interest to readers in Britain. Furthermore, the overarching principles explained in the book allow ideas and results to be extrapolated to other species. Also new is the cover illustration – the flying Whinchat Saxicola rubetra has been replaced by a flying Goldfinch Carduelis carduelis; and yes, that is not an error. Remarkably, that Goldfinch on the cover really is an illustration and not a photograph.

Moult and Ageing of European Passerines is essentially a book of two halves. The first half of the book is often overlooked by those who dive straight into the species accounts. Yet this is a brilliant overview of the entire process of moult and the general principles used – principles that allow the reader to approach moult in any species, not just those covered in detail later. All ringers and the vast majority of birders will surely find something of interest here. The text is clear, accessible, and a perfect primer – or refresher – on everything moult. Topics covered range from functions of plumage and an overview of moult terminology to assessment of moult strategies and the constraints imposed on moult by other life factors.

The second half of the book consists of the species accounts. A full assessment of moult in each species is given, from the authors’ own experience in Switzerland (thousands of individual birds in some cases) and from a near-complete review of relevant references. Want to know how many greater coverts a typical juvenile Thrush Nightingale Luscinia luscinia moults during its post-juvenile moult? Or the extent of pre-breeding moult in a Grey Wagtail Motacilla cinerea? Or something about the geographical variation in the moult extent of Reed Buntings Emberiza schoeniclus? Here’s where you’ll find all of that, and more.

Data are presented both in text form and in infographics, and it’s hard to underestimate just how much information is packed into the species accounts. If I’m writing a paper on ageing or I come across an individual with atypical moult, Jenni & Winkler has always been the first reference I check – and, by and large, it gives me exactly the information I need. That habit looks set to continue with this second edition. Species texts are usually around a page in length, though species with more complicated moult receive more: Common Whitethroat Sylvia communis, for example, is treated to almost four full pages of text – plus a further three pages of photos. Every species account is liberally illustrated with photos of spread wings showing examples of moult, accompanied by extensive captions explaining what can be seen. Photos per species range from two (Tree Sparrow Passer montanus, which has a particularly straightforward moult strategy) to 17 for Common Whitethroat; typically, there are about eight per species. Combined with the ‘comments on ageing’ sections, the images are likely to be the most visited parts of the book for ringers. It’s also where, with a little lateral thinking, non-ringers will find plenty of information and inspiration for ageing birds in the field. It’s a large book (31 x 33 x 2.6 cm), so it’s pleasing to see that it is also available as an electronic version (albeit with an eye-watering price tag), perfect for taking into the field on a portable electronic device, and with the added advantage of being able to zoom in on any given image.

My only quibble with this publication is with the print edition. The photos in the print edition are dark – really dark – to the point that I was struggling to see some of the more subtle moult limits that the images aim to show. These differences are even more obvious when compared with the first print-run of the first edition. For a subject where subtle differences in colour are everything, the quality of the printing is absolutely critical. The ‘good’ news is that the images in the electronic version are every bit as perfect as you’d hope; but the printing process has severely subdued the usefulness – and the beauty – of the images in the printed version. In my view, given the striking differences between the images in the electronic and printed versions, it wouldn’t be unreasonable to suggest a recall and a reprint.

Don’t let my grumbles with the printing dampen this review. The second edition of Jenni & Winkler is superb. It replaces the first edition as one of my favourite publications, and one that will continue to be well used. It is not cheap, but if you have even the slightest interest in moult or ageing, it really is a must-have – but do consider the electronic version until the printing issues are sorted out.