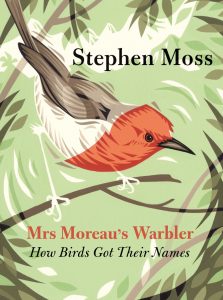 We are blessed with a large literature on bird names, much of it quite recent. It is easy, for example, to discover the meanings behind the Latin or Latinised nomenclature, to investigate eponyms and to find long and fascinating lists of obsolete or dialect names. What, then, is the point of this new book?

The answer lies in one small word in its subtitle – ‘how’. For this is not another annotated, explanatory list in any shape or form: it is a narrative account of how our bird names came about, evolved and multiplied over the greater part of two millennia. With this author, I looked forward to a good read and I was not disappointed: Stephen Moss has told his story well, combining a relaxed style of writing with an impressive amount of scholarship, conveying once again his fascination with the cultural relationship we have with our birds.

The first five chapters, comprising two-thirds of the book, begin with the oldest recorded names from surviving Anglo-Saxon sources and go on to show that these changed, with the language, and were added to over succeeding centuries. The account proceeds to the earliest development of recognisable ornithology, the years of exploration and discovery and the move to name and classify formally. There is an astonishing welter of information here, with a judicious mix of clear fact and careful deduction producing a very convincing survey. I think that most readers will gain new insights and learn new things – I had not realised, for instance, that some of the bird names we use today are essentially the same as those used a thousand years ago, or even more.

The last third of the book brings the story up to date, introducing ornithology and birding as we know them today and how, in many different ways, we now relate to the naming of our birds. Inevitably, the effects of new ideas about speciation, and of course the sometimes startling results of DNA investigation, feature prominently.  This, perhaps, is the most thought-provoking part of the book. I suspect that many will enjoy Stephen’s take on the long-running and still somewhat controversial movement towards standardising English names throughout the world.  While not necessarily disagreeing with that movement, his view is that it would be a very great pity if we were ever to lose the wonderful diversity, the historical associations and the informality of some of our names on the altar of conformity. I agree wholeheartedly.

And what, finally, of the book’s unusual title?  The story behind it explains a lot about Stephen’s fascination with names and their origins. He first encountered Mrs Moreau’s (nowadays usually Winifred’s) Warbler Scepomycter winifredae  in the 1970s John Gooders’ part-work Birds of the World.  Winifred Moreau was an ornithologist in her own right, but was also the husband of Reg Moreau, one of the hero figures of my early birding years and author of the acclaimed The Palearctic-African Bird Migration Systems. He named the bird after her. This book’s Prologue tells the story, and in its Epilogue we find Stephen Moss at last making it to the Uluguru Mountains of eastern Tanzania and seeing the rare endemic for himself.