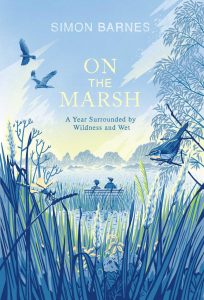 Birders often choose where to live based, in part, on the opportunities for watching wildlife. The proximity of high-quality wildlife sites might be your greatest priority. Or perhaps the potential of a wildlife garden would be the most important factor. Simon Barnes manages to have it both ways, choosing a house on the edge of the Norfolk Broads that comes with its own little patch of marsh, backing directly onto the garden. A burst of song from a Cetti’s Warbler Cettia cetti during the viewing helped to seal the deal.

This book is not so much about the wildlife itself but about how taking a day-to-day interest in wild things improves the quality of life of the author and his family. His teenage son, who has Down’s Syndrome, derives particular pleasure from the wild animals that live around their home, as brought to life in charming portraits of shared wildlife experiences.

It is wonderfully well constructed and well written, as you’d expect from Simon Barnes. A sudden abundance of common butterflies in high summer is ‘an infestation of beauty… as if a stained-glass window had deconstructed itself, each separate tiny pane taking wing across the cathedral of the marsh.’ The style is easy-going, almost chatty, weaving reflections on art, literature, music, travel and (of course) sport around each wildlife encounter. It’s like one half of a long conversation with an old friend: perhaps an evening in a country pub, nursing a drink and listening to what he has been getting up to.

Above all, the book reaffirms the point that a strong appreciation of the natural world is all-encompassing; not so much a hobby as a way of life. Increasingly, it comes with challenges and contradictions as wild places and the species that depend on them become ever more constrained. The first Common Swifts Apus apus of the year, later and in smaller numbers than usual, bring both pleasure and pangs of apprehension. At the other end of summer, the recently fledged Barn Swallows Hirundo rustica from the stables are worth celebrating but not without fretting over whether any will survive for long enough to return and rear their own young. Barnes has given such concerns a lot of thought and his own philosophy for avoiding despair emerges as we are guided gently through the year.